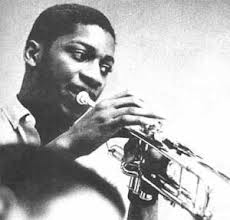 Don Fagerquist was the first focus of our attention in this series about lesser-known brilliant trumpet players of the 1950's. If Fagerquist's playing was pretty much down-the-middle, Booker Little set up musical camp farther out on the edge. Fagerquist was anchored in jazz developments of the 40's and early 50's, while Booker looked ahead to the 60's.

Booker Little was born in 1938 in Memphis, a city where Phineas Newborn, Jr. was elder to a number of future jazz artists, such as Frank Strozier, trumpeter Louis Smith (Booker's cousin) and George Coleman, who got Booker moving seriously toward jazz. 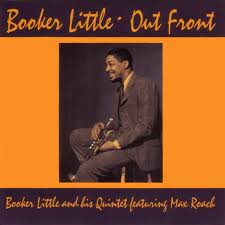 In 1954, after high school, Booker moved to Chicago and got a Bachelors degree in music at the Chicago Conservatory. For nine months of his stay, he roomed with Sonny Rollins, who was in Chicago preparing to join the Clifford Brown-Max Roach Quintet. Sonny introduced Booker to Max Roach, with whom Booker made his first recording and eventually gigged. The musicians in Roach's circle and those he knew from early Memphis days became many of the people he ran with during the short span of his career. His first recording was in June, 1956 and he died on October 5, 1961 of uraemic poisoning/kidney failure at the age of 23.

Booker articulated his views on music in a valuable Metronome magazine article by Robert Levin, an article used as the basis of this piece by Dan Miller. One way to introduce Booker's music is to quote his own words from that interview:

"Most of the guys who are thinking completely conventionally--they'd say 'Well maybe you've got a wrong note in there.' But I can't think in terms of wrong notes--in fact, I don't hear any notes as being wrong. It's a matter of knowing how to integrate the notes and, if you must, how to resolve them. Because if you insist that this note or that note is wrong I think you're thinking conventionally-technically, and forgetting about emotion.


Booker continues: "And I don't think that anyone would deny that more emotion can be reached and expressed outside of the conventional diatonic way of playing which consists of whole-steps and half-steps. There's more emotion that can be expressed by the notes that are played flat. Say it's a B-flat, but you play it flat and it's not an A and it's not a B-flat, it's between them and in places you can employ that and I think it has great values. Or say the clash of a B-natural against a B-flat." 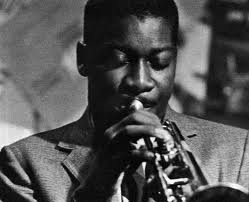 You can hear that philosophy-find the emotion-reflected in Booker's playing, although not in a radical way. That is, rather than playing "free"- without distinct tonal guidelines, he stays "inside." He finds his way to emotional expressiveness through other means; chiefly by his sound and by paying a great deal of attention to shaping individual tones.

The tone itself, like Freddie Hubbard's, is broad, open and bronze-like [for trumpet nerds: think of a large bore Schilke, with a 1-C cup mouthpiece].  Booker adds embellishments to a high percentage of his notes: smears, near-smears, half-valves and other shadings. He is also likely to snap quickly between registers, creating a sense of dislocation.  Despite the clarity of Booker's tone, even at its most stentorian it doesn't sound "martial." There remains a vulnerable quality that I have yet to hear in another player.

We'll begin by listening to a lovely ballad performance-"Moonlight Becomes You," from the October 1958 album, "Booker Little 4 and Max Roach."

The next track is from the Frank Strozier Lp "Runnin," recorded in 1959. I include this because I think it shows the reason Booker wanted to concentrate on non-traditional forms. The tune is based on "rhythm" changes and he's essentially running lines that aren't really connected enough to create a larger cohesive form. They follow the chord changes broadly, but are actually pretty diatonic within each sub grouping of changes and, while technically proficient, just aren't as interesting as his playing in more convivial harmonic contexts. http://youtu.be/ktI-X8nx558

Here he is in a Teddy Charles Sextet recording from August, 1960, with Booker Ervin, tenor, Mal Waldron, piano, Ed Shaughnessy, drums, Addison Farmer, bass. The tune is "The Confined Few" (I think we'd have to change that title nowadays). Here, while still dealing with frequent chord changes, he has more range for emotional expression. If we don't get to hear him hold long tones, and in different registers, we're just not getting all he can give us:

When he joined forces with Eric Dolphy, later in 1960, he seemed to have found his most convivial musical milieu. Their approaches are similar. Dolphy also shapes notes, pushing them into microtones. He also makes huge interval leaps. For both players, the emotionalism that often stays buried in the sub-strata of jazz, is brought close to the surface. Their first recording, in December, 1960's lp "Far Out," included this track, "Ode to Charlie Parker."

In February 1961, Booker was part of the "Abbey Lincoln-Straight Ahead" session, where he does some beautiful playing. They were well matched in emotional pitch. Here is "When Malindy Sings."

Booker was part of the large ensemble Coltrane assembled for the Africa Brass sessions, but was not a featured soloist. The last series of recordings he made, in August 1961, was with Max Roach Nonets. Sandwiched in between was a date with George Coleman, "Booker Little and Friend" and a final date with Dolphy, recorded at the Five Spot on July 16, 1961. The last track we'll hear, Bee Vamp (pt 1 w. access to pt 2) comes from that session.

Booker Little was not a "representative" '50's player; nor, for that matter was he a '60's player. His very individual approach was keyed by a desire to stretch the jazz language to fulfill the key goal of his musical life: emotional communication with the listener.

It's an honor to comment on your Booker Little chapter, Steve -- He is one of my eternal trumpet-/ jazz-heros; and not only because we both accidentally share the very same initials :)

There was a time during the late 1980's, early 1990's where I was pretty much trying to copy his voicings:

Another name popped into my mind: Stu Williamson, also a great 1950's brass man who died too early for getting the recognition he would have deserved.

Thanks, Flat5. Your comments and feedback are welcome.