After I was shown the Charles Mingus Cat Training Toilet Training web page (guaranteed real), I gave an earful to my flunkies at the Institute. If one is not at the cutting edge of such surreal conjunctions, where is one?

To grease the machinery, I upped the number of nembutal breaks for Institute staff and threatened to shut off their twinkies ration. Productivity skyrocketed and here we are, all smiles. The results will be available in convenient .pdfs when Birnam Wood do come to Dunsinane. Until then, here are your ten teasers:


Watch your local google-owned website for the arrival of these valuable tracts. 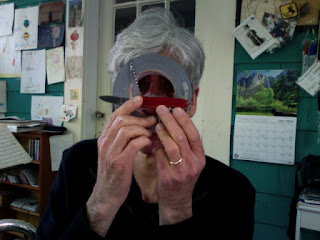 Posted by Steve Provizer at 6:51 PM No comments: 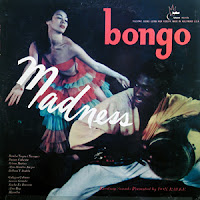 Insomnia can be educational. Early risers or the sleep-deprived might want to know that from 5:30-6:00 AM, you can catch Dobie Gillis on one of the Pronoun channels on cable TV-"Us," or "We," I forget which. The episode I saw had Dobie and Maynard both wearing ROTC uniforms. Like, for real. It brought me back to this old post I wrote a couple of years ago. Speaking of re-runs...

Yankee Dog mentioned Frank Gorshin's hep cat role in "Where the Boys Are." I have no doubt that there's a large sub-division of the Academic Culture Industry that has chewed on the subject of jazz/beat portrayals in film and TV like a chia pet on a licorice rope. But boys, if you're reading, try to chill. I'm not trying to grab anybody's dissertation. This is just personal flashback and speculation based on such ephemera as I recall from adolescence.

The steadiest diet of jazz-beatnik-hipster my cohort got was from Maynard G. Krebs, Dobie Gillis' pal. Each on-screen appearance by Maynard (Bob Denver, who eventually reincarnated as Gilligan) was signaled by a very cool little blues motif played on flute. Maynard (Ferguson, anyone?) threw in an occasional "man" and "cat," but his most salient character trait was, as Washington Irving said of Rip Van Winkle,  his "insuperable aversion to any and all kinds of profitable labor." If the notion of getting a job was mentioned, he would stammer out "W-W-W-work?!" He was lovable and ineffectual. If there was any cultural danger represented by jazz-loving beats, Maynard was there to reassure us they represented no real threat. 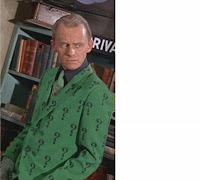 Gorshin was slightly more threatening because to me, no matter what he played, he always exuded a barely-controlled murderous impulse (see his 'Riddler'). But in "Where the Boys Are, he was an egghead loser, with thick horn rimmed glasses. Shoot-his name was Basil. The rest of the gang was rock and roll. He was jazz and out of it. Impotent over-intellectualizing, thy name is Beat.

In Roger Corman's "Bucket Of Blood," the hapless Walter Paisley kills a few folks and covers them with plaster so he can be accepted as an 'artist' by the crowd at the beatnik coffee house-a dupe of the fast beat crowd. That crowd, while not homicidal, was shown to be steeped in bohemian self-delusion and was really just there for cultural sport. The presence of real jazz musicians Paul Horn and Fred Katz in the house band undermines that conceit-the music's too good.


The only really evil character in the beat movie milieu that I know of was played by Peter Falk in his first big movie role-The Bloody Brood-1959-same year as Dobie on TV. This is a picture riddled with sado-masochism, and a very confused message. On the one hand, the filmmakers want to blame the wayward milieu of the Beats for 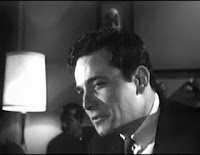 providing ripe soil for evil, and yea, maniac faux-beatnik Falk wanted to get his "kicks" (beat code), but they dressed him in a suit, he smoked a cigar and his name was Nico. The feeble Beats murdered, but only because their lack of will made them powerless to stand up against Falk. Eventually, someone with a sane haircut brought them to their senses.

The final characters in this cultural menagerie are Steve Allen, first host of the Tonight Show and Soupy Sales. Allen was half yenta/half aspiring hipster, a composer and decent jazz pianist who had an odd lot of people on his show, including Frank Zappa,  Lenny Bruce and Jack Kerouac.  Soupy had a serious array of jazz folks on-Hawkins, Armstrong, Bird... Let it be noted that the only Clifford Brown footage I know of is from Soupy Sales' show. But these guys are less about Hollywood dealing with jazz/beats than the jewish/jazz/hipster conspiracy-a discussion that needs its own space. 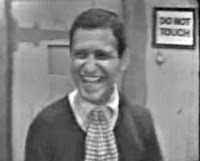 In the meantime, I'd be willing to bet my tattered copy of "Howl" that when drugs and beats are part of the plot of any movie made in this era, jazz is the soundtrack-not rock and roll.

My whole musical life, I've heard snide comments about "chick singers." Maybe the level of enmity jazz instrumentalists harbor toward vocalists doesn't quite rise to that between the Houses of York and Lancaster, but there is definitely something there.
Mostly the battle is carried out sub rosa-among the boys-and anecdotes are few in the jazz history I've read. Buddy Rich and Frank Sinatra exchanging blows and engaging in various forms of mutual psychological torture in the Dorsey band in the 1940's doesn't stand as a fair example, as it involves two of the biggest egomaniacs in the history of jazz/popular music. Also, while sex no doubt played a part there, it's heterosexual sex that keys this story. Seems like where there's smoke, jazz and sex, there's always been fire.

There's a thesis online by Ariel Ann Alexander with reasons why female participation as instrumentalists in jazz is limited. Many subjects of her study note that band members seem more interested in hitting on them than in playing with them. They also note faculty members who tried to steer women away from playing instruments toward singing and generally tried to get them to tart themselves up for performance. Sexual harassment by teachers was also widely noted.

So, lust is a touchstone. The other 7 deadly sins I'm accusing jazz musicians of (at least in this post), are pride and envy.

In previous posts I have tried to make a case for the importance of vocals in sustaining jazz. My premise is that, while instrumentalists can be credited with the major musical advances, there is a feedback loop with singers. And, that vocalists and instrumentalists who sing have consistently connected with larger numbers of people. With rare exceptions, even the most gifted jazz instrumentalists would have been hard-pressed to sustain their careers without in some way working with or on the same bill as vocalists.

Jazz musicians may not have parsed it out this consciously, but their egos know it even if they don't.

One way to defuse this emasculating predicament is to reduce women vocalists to second class citizens and the easiest way to do this is to reduce them to sexual objects-or at least "the other" and not worthy of a hang with the boys. Nothing has changed, of course. You've simply wrapped your self-delusion around a flimsy sexual chimera, which you then try to project onto someone who has probably invested as much sweat equity in her art as you have in yours.

I've been tough on us jazz guys, but we are not really loathsome creatures. No more than most. Some of us may take the more arthritic aspects of jazz mythology too seriously and that doesn't help, but we can be very generous people. So suck it up, guys and relax. Man or woman, our trip on this paper moon sails over the same cardboard sea. 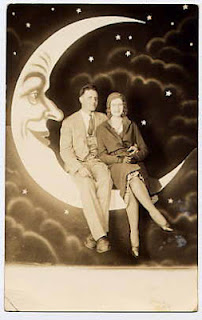 Posted by Steve Provizer at 5:49 PM No comments:

In a recent post, I talked about the rise of vocalists in jazz. The point being that vocalists are surviving better than instrumentalists the aging process of the jazz repertoire and the need for anyone to have follow Bird/Tatum/Any Other Jazz Giant's version of "All the Things You Are;" that at one time, jazz instrumentalists and audiences might have forged a strong emotional bond, but that singers are now better able to do that.


A neat theory, but one derived from my buying into the common wisdom: that jazz is intrinsically instrumental and that cyclically, vocals "crowd out" instrumentals for the public's attention. Reasons used to explain this are as useless as the bromides used to explain fluctuations in the stock market. So, to replace this flawed common wisdom, I hereby propose a new Unified Vocal/Instrumental Jazz Field Theory:
Statistics on the percentages of recordings throughout jazz history that were instrumentals versus vocals, and sales stats on these would be very telling. I'm told that such data is scarce and unreliable, especially before the 1940's. I'm just a lowly blogger without a grant (aka "bomb thrower"), so I'll just toss a few skimpy internet-derived perspectives into the pot: 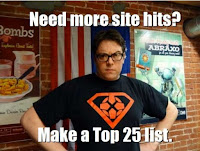 At this site you can find one person's notion of the "Top 25 Jazz albums of all time." They're all instrumentals and I bet vocals would be hard to find on anyone's list out there.
Here's another chart, of The Most Successful Artists of Each Decade. They're almost all vocalists.
This site, by a Swedish statistician, has something he calls The Top Songs of the Decade.
Take it as you like. In this nebulous statistical world, cases could be made to fit a great many theories (jazz crop circles outlining II-V changes?) 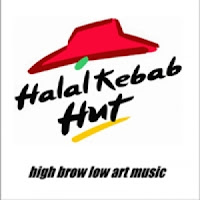 In any case, I don't think this breaks down to the Low versus High Music dichotomy. At least, it may not be a useful way to see it, as the musicians who made jazz happen are on record as preferring the "good vs bad" model of music, as opposed to the "high-low" one. Is Shaw's Begin the Beguine High or low? What about Armstrong's Dinah?


Is the general misperception about the relationship between instrumentals and vocals in jazz the result of a yawning crevasse between the makers of jazz and the writers on jazz, with listeners wandering bewilderedly in critical limbo? Or-although this is almost unthinkable-am I just plain wrong? 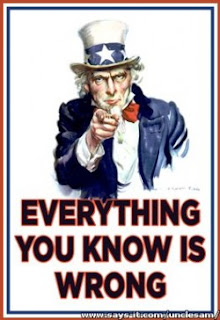