After looking at Fats Navarro, Howard McGhee is a reasonable next post.

We'll use his nickname: Maggie. He was about 5 years older than Fats and despite also dealing with addiction, lived a lot longer (1918-1987). They were stylistic brothers and their paths crossed often. They both had the power and range to play lead and could masterfully handle bop chord changes. They were the godfathers of the fiery 1950's lineage of the trumpet; more so than Diz or Miles.

Here's Howard early on, 1942, with Andy Kirk & His Clouds of Joy playing "McGhee Special." It's strong playing, in the bravura swing-to-bop vein.

This 1945 track retains some of the R&B/jump/jive strain that Hampton and others were bringing upfront, but infused with Bird and Diz's new harmonic (and to some extent rhythmic) developments.
Read more »
Posted by Steve Provizer at 2:00 PM No comments: 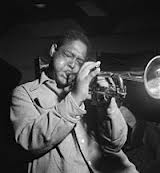 A quick timeline has him growing up in Florida; after high school, hooking in to Snookum Russell's territory band in Indianapolis, joining Andy Kirk in Kansas City and ending up in NYC.


Roy Eldridge was father to the 1940's generation of trumpet players and Dizzy Gillespie moved it to bop. Like Diz and Roy, Fats, along with Howard McGhee, was able to play with piercing power in the upper register and also seriously address the (chord) changes. Fats and Maggy were foundational for the next generation, as was Freddie Webster (a less brilliant lead player). Throughout the 40's, apart from small group playing, Fats continued to play lead with the best big bands-Earl Hines, Billy Eckstein, Illinois Jacquet, Lionel Hampton.

With no early recordings, we don't know how Fats sounded as a teenager, but we know he learned Dud Bascomb solos from the Erskine Hawkins' band. That's essentially simplified Eldridge territory. Fats' first recorded solo was on "Shorty Boo," with Andy Kirk, which I can't find online. Please post it if you got it.


It wasn't long before he was doing sessions with smaller groups and really digging into the changes. Here he is in a Tadd Dameron sextet: in 1947:

Here's another Dameron group, a year later, with a very unusual tune:

And 1949, with the Metronome All-Stars (the trumpet "chase" is between Fats and Dizzy, despite what the graphics of the video say about Miles).


We'll close with probably the last recording extant of Fats, with Bird, May 1950. It's an air check, so you hear these guys stretch out much more than in the usual 3:00 wax:


A tragic combination of tuberculosis and heroin did in Fats. He wasn't just a "key figure," he was an end in himself.