There we are, in a nutshell. On a throne, with our feet in a pile of shit.

The vistas of unremitting destruction shake me to the core and my dreams are taken up with loved ones rushing away from white clouds of poison. Amid this miasma of empathy mixed with paranoia, the act of blowing the trumpet is completely self-indulgent and also necessary.

I brew and stew about catastrophes, but obsess about my embouchure. It's escapist, but imperative. It's not art "in the face of something" (You'd know that if you heard me). It's simply one other act of attempted self-definition which, in the face of crises around the world, is simply narcissism writ small.

Jazz and humor still remain central, but the gravity of recent days weighs upon us all, as well it should.
Posted by Steve Provizer at 6:14 PM No comments:

You know the story: A guy is crawling on the ground looking for something under a lamp post. His friend comes up and says "Oh, is that where you dropped your wallet?" The guy replies," No, I dropped it over there, but this is where the light is." 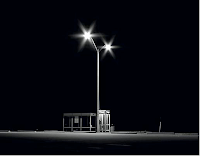 So, America has dropped its wallet and instead of going off and finding some new source of light (solar-powered? cheap flashlight made in China? "alternative" media?) we are trying to find it under a lamp post that was bought and paid for by some very wealthy and powerful people.
We actually have the choice to look elsewhere for our wallets (or for what you might call a reasonable explanation for our increasing impoverishment), but people seem to keep getting sucked into that highly controlled "staying-on-message" pool of light. What the hell is happening here?

Are we so much under the sway of the Myth Of Infinite Mobility that we continue to identify with the barons who are picking our pockets- the "winners" in our culture, the fulfillers of the myth?
Have we come to a point that we believe so little in the intrinsic nobility of service to the community that the only people whose efforts we will support are those seeking a tax break so they can open a hog farm in a "right-to-work" state?
Does the Myth of the Rugged Individual hold sway to a degree that we have completely lost the sense of "there but for the grace of god go I?" and therefore hold no group responsibility for the fates of those whom fate did not bless?
Follow your dreams? OK, no problem, but please remember that our fates are intertwined.
Also remember that just because you're paranoid doesn't mean you're not being followed.

Posted by Steve Provizer at 1:33 PM No comments:

"Ma Nuit En Enfer. Or, A Night at the Movies" by Steve Provizer

Hollywood movies suck. Not only that, going to a multiplex theatre is one of the most dispiriting, depressing and irritating experiences imaginable. Yet, it's one to which Americans are sado-masochistically drawn by the millions. It's especially piquant to plunge in just after you've seen the Oscars; like turning over a beautiful moss-covered log in the forest and having your hand covered with slimy larvae.

I had submitted to watching the Oscars only because I actually know a couple who made a movie that was nominated for best picture. I was curious to see someone of my ilk trying to pass in that glorious parade of narcissism, so I gritted my teeth and abided the endless car ads, the gruesome display of self-love and the singular lack of humor that marked the broadcast. A person's gotta ask: Does each winner really love his or her family that much? (actually, one noticed that it was only the men who gushed about that, not the women) And you know what else? Bob Hope was always stiff as a board. Finding 5 bits from him that were funny must have taken the editors half a day.

Right after that cavalcade of bonhomie, circumstances compelled me to transport my daughter to a multi-theatre gigaplex located in downtown Boston. The trip was necessary because video she'd submitted of herself singing one of Justin Bieber's  songs was chosen to get screen time in the "director's cut" (watch out Fellini) of his movie. It was about 2 seconds worth, as it turned out, but kudos to her. It was certainly Papabear's responsibility to get her there so she could strap herself in with the 3D glasses and bask.

I decided that the easiest thing would be to confer with my wife and find another movie that played at about the same time. It seemed a better alternative than drinking over-priced beer in the Theatre District for two and a half hours. Not the first time I've been wrong.

Walking in from the sidewalk, I knew immediately that we were in for an aesthetic treat. The interior of the place was right out of Albert Speers by way of Frederick's of Hollywood. The designers had managed to evoke mall anomie and blend it with the cheezy theatricality of Grauman's Chinese Theatre; all of it burnished with the accumulated grime of thousands of buckets of spilled popcorn smothered in "butter product."

Entering the theatre to see "True Grit" was like stumbling into a Mythbusters episode investigating how many decibels of sound it takes to induce diarrhea. We were forced to submit to half an hour of commercials and coming attractions-each of these pitched to 15 year old meth freaks. Bad in themselves, played at the volume level they were, they became instruments of torture. I'd paid Eleven and a half bucks to get the fillings shaken out of my teeth and have such of my hearing apparatus still remaining reduced to a distant tinnitus-tinged memory.

I'll spare you a digest of the plot of True Grit. Initially, the experience was fairly pleasant, although the film's score was annoyingly Ken Burns-ish. However, as it went on, the characters more and more devolved into mere examples-albeit pristine examples-of "types." And, after the third bludgeoning, I asked myself how was it that crude, dismemberment/viscera-saturated violence had become so much the norm that it didn't even bear mentioning in film reviews?

While we're at it, someone tell me how many teachers can be paid union dues for the cost of one movie  ($300 million for "Avatar") and at what point filling out questionnaires at the end of a movie became electrodes strapped to your head.

No, my friend, the next time the latest "big" filmic release arises as a topic of conversation, you will find me curled up behind the couch with headphones on my head, a Rumpole in one hand and a Chateau Thames Embankment in the other.

Posted by Steve Provizer at 3:08 PM No comments: