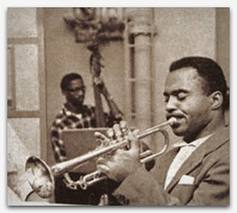 Joe's one of our (Boston) boys. His career exemplified some of the larger themes of 50's trumpet playing: an early start, bop influence, big band experience, adaptability in various musical situations and on the down side: heroin addiction and early death.

Born 5/15/28, Gordon got early exposure to classical music through his mother, an amateur singer. He heard the Basie band, then a Coleman Hawkins/Don Byas group when he was a teen and signed on for a class in "modern music" at the New England Conservatory.

In his late teens, he worked on the railroads as a sandwich boy and jammed at various stops during layovers. His first formal gig was in 1947 with vibes player Pete Diggs in Akron(Pete Diggs?).

It's a nice arrangement, right out of Birth of the Cool and the sound developing simultaneously on the West Coast. Gordon's solo is well-articulated and constructed, with nice little vibrato flourishes at the end of some phrases.

After Sabby, Joe moved through groups led by Lionel Hampton, George Auld and Don Redman. He did some playing with Charlie Parker when Bird was on the Massachusetts circuit. There is a December, 1952 private recording of "I Remember April" with Gordon and Bird, but any solo Gordon played didn't make it onto the recording. However, he and Bird did a live recording the same year at Boston's Hi-Hat club. Gordon's playing here on "Ornithology" falls in the Benny Harris/Miles school, although with a sharper tone and some different approaches to phrasing:


In 1954, Joe joined Art Blakey in a pre-Messengers group with Gigi Gryce and Walter Bishop which recorded on May, 1954. The good news in this video is there's 3 tracks, the bad news is the sound quality is not great. In any case, Gordon's playing has evolved. He's using more of the high end of the horn and the complexity of his phrases moves him in a similar direction to that of his successor with Blakey-Clifford Brown.


The first two dates under his own name were recorded by Gordon in September, 1955. Personnel: Charlie Rouse (ts), Joe Gordon (t), Junior Mance (p), James Schenk (b), Art Blakey (d). Here is "Rifftide" (Hackensack). Listen for "Over the Rainbow":


Gordon recorded a similar date with fellow trumpeter Donald Byrd and Hank Mobley on tenor. He freelanced around Boston until he got a call to join Dizzy's big band in 1956 on a tour to the Middle East and Eastern Europe. Maybe the bread was good and the work steady, but it was not a situation conducive to developing one's solo skills.

When Gordon came back to NYC to work with Diz at Birdland, he recorded a few tracks with Horace Silver. Personnel: Hank Mobley (ts), Joe Gordon (t), Horace Silver (p), Doug Watkins (b), Kenny Clarke (d). Here's a chance for Gordon to get his teeth into some blues. Beautiful note choice, although I hear him thinner on the top and occasionally falling off on his articulation:


After a final, abbreviated tour with Dizzy's band to South America, Gordon came back to Boston in 1956 and joined Herb Pomeroy's big band, where he stayed for two years and recorded a couple of albums. I couldn't find anything that Joe soloed on. I'm sure he did solo, but it was a big band, it was Herb's band and Herb was a trumpet player. It stands to reason that, as in Dizzy's band, solo space was limited.

In May, 1958, Gordon moved to the West Coast, where his style fit well. He was a sideman with Benny Carter, Dexter Gordon, Harold Land and Barney Kessel before going with Shelly Manne. He did a lot of recording with Manne, including a multi-volume set live at the Blackhawk w. Richie Kamuca (ts), Joe Gordon (t), Victor Feldman (p), Monty Budwig (b), Shelly Manne (d). By this point, LP's and long solos were well entrenched in jazz recording and we can hear Joe stretch out as here, muted, on "Summertime:"


In 1960, he joined Thelonius Monk's group for another live recording at the Blackhawk. Personnel was Monk on Piano, John Ore, Bass, Harold Land and Charlie Rouse Tenor saxophones, Billy Higgins, Drums. He sounds relaxed in the Monk-sphere. I would have liked to hear him do more with Mr. Monk.


His final album as leader was "Lookin' Good," 1961, which was the first LP to feature a number of Gordon originals. This tune, "Terra Firma Irma," shows some of the modal influence that had infused jazz by this point. It's reminiscent of Adderly's Jeannine.

[Sorry, no options for that session available]

So ended Joe Gordon's career, at age 35. A cigarette left burning set off the house and he was killed in injuries sustained in the fire. He may or may not have been using at the time of his death.

It think it's fair to say that there was an up and down curve in Joe Gordon's career. His harmonic understanding grew more sophisticated, but there was initially a strength in his sound-a little bit of swagger-that never quite came to fruition. Withal, Gordon was a solid, creative force, whose style blended bop and a more cool approach in a way that worked for jazz musicians on both coasts then and which is a joy to listen to today.

In the Pomeroy band, Joe had to share solo space with not only Herb but Lennie Johnson as well. Still, Joe did solo on five tracks on the band's 1957 recording, Life Is a Many Splendored Gig: "Less Talk," "Wolafunt's Lament," "Feather Merchant," "Jack Spratt," and "It's Sandman."

Thanks for the info, J.R. I do think of Lenny as more of a lead player, but I'm sure he did solo as well. It was a hell of a band.

Same LP, Johnson had solos on "Big Man" and "Our Delight." You're right, Lennie played lead, but Pomeroy marveled at his ability to do both. Bill Berry replaced Gordon on the Pomeroy band and got all the solos on the Band in Boston LP. Herb himself did not solo on either LP.

I've been in touch with Joe's widow, Irma (Terra Firma Irma). She lives down in Florida and I'm planning to see her when I go to visit my kids later this Winter. I know she has some great stories to tell and memories to share

Steve-Feel free to share any of any Irma's stories.