"...why is the Tristano school always shown as a branch of cool jazz? Those guys were hardcore bebop heads. Is it just that they were white and some of them wore glasses so people confuse them with Brubeck?"- Ian Carey

*Please note the gender limitations of this process. Until the 1960's, female jazz musicians seem not to have been allowed to wear eyeglasses in photographs.


Very few examples of eyeglass wearers in early jazz could be found by our research staff: James Reese Europe, Miff Mole, Charles "Doc" Cooke, Fudd Livingston and Frank Teschemacher. Questions arise: Were photograph-ees in general warned to take off their glasses to avoid reflections from the flash powder? Was wearing glasses considered "namby-pamby" enough that jazz players of that era felt compelled to take their glasses off? Is good eyesight part of a genetic constellation that also includes genes dominant for improvisation? No clear answer emerges. In any case, white or black, as the above photos show, there was remarkable consistency in the style of the eyeglasses, thus simplifying SAT of early jazzmen (Primus jazzus sapien).
Assessing the next generation, we still see very few eyeglass "users." However, those who did were among the most well-known band leaders. Trombonists Tommy Dorsey and Glenn Miller led the way, along with Benny Goodman. This group-Swingus Jazzus Sapien-made a dramatic stylistic purge and massed around a new, wire-rimmed style.  The Institute continues to research whether the domination of trombone players in this area reflects the relative difficulty of keeping a slide in focus. In any case, the stylistic consistency of the eyewear allows for easy SAT of this jazz sub-category. 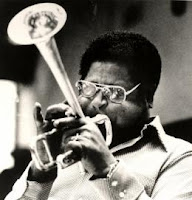 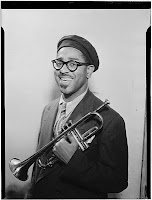 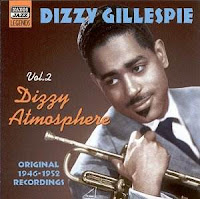 ("sunglasses")-should be the sine qua non for eyewear, rather than the Institute's more reasonable, genre-specific approach.

Happily, there was more consistency among white jazz musicians. While it's difficult for the Institute to create a flow 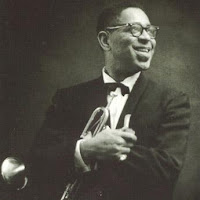 chart that would show definitively who originated styles and who followed, we can see a strong black horn-rimmed lineage running from Misters Gillespie and Monk to white jazz musicians who adopted the style post-WWII. We feel it is here that the confusion cited by Mr. Ian Carey is rooted. 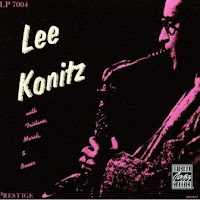 Some adoptees of this style include Lee Konitz, 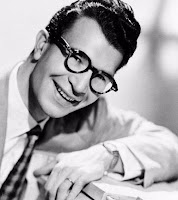 We at The Institute are confident of our methodology. So confident, in fact, that we believe the natural tendency to group these musicians together because of the similarity of their eyeglasses is well-founded and that the idea of wide stylistic differences between them is illusory. Our SAT analysis clearly shows that, not only is their music essentially congruent, they may actually be the same person. Is there a record of them all performing or recording together? We think not.

Next time: The Tell-Tale Cravat.

Posted by Steve Provizer at 5:34 PM

Hmmm...Im missing T. Monk's glasses which I thought were even more daring than Diz's.

And did they photograph Ella with her glasses in the day? I don't remember....

You should see me with my "double-glasses" routine.

That's very hip (and irritating!), and even more daring than Monk's!

P.S. -- I've just reposted that bitty-ditty HERE -- That track with the "real" Don (Byas) and Charlie Shavers, "Don's Idea", is so great!

I don't think Ella was (publicly) photographed with glasses until the 70's.

Bop reliance on tunes like I Didn`t Know What Time It Was snd How High The Moon were clearly inspired by vision deficiencies. Why do you think he beeped when he should have bopped? That's right, he kept tripping over mic cables.

She was, I guess, the hippest, and coolest of them all. Those glasses are priceless:

Hey, you're asking for the moon, Steve? -- My question, as being one of the blindest, is:

"How Deep is the Ocean?"

We introduced "How High The Moon" in German: "Wie hoch der Mond?"

The moon seems to be a very interesting sight for the almost blind, but hip jazzers:

They are always asking for "More Moon".

Brew-that proves it-you are the coolest jazz mensch of all...Love Blossom-and it was rare for a female performer to have her photo publicly available. The difference? She spent a lot of time in Paris and that photo I think was taken there.

She had a wonderful vocal group in Paris, called "the Blue Stars Of France", and delivered some fine arrangements of jazz standards (brand new songs then!) in French.

Very elegant music, as only the French can.

Blossom was swingin', she was hip, and her high pitched voice was very special:

The Surrey With The Fringe On Top

This one (the earlier version on LP) is clearly inspired by Miles, isn't it?

But no glasses here.

Miles credited Blossom for his version. She really brings everything out of those lyrics.

Steve -- Miles must have been a time traveler then, 'cause Blossom recorded her studio version of "Surrey" in 1957, on Once Upon A Summertime.

Miles recorded his rendition in 1956. Details can be found HERE.

He may heard it in a club, or his memory didn't serve him right. Most of his medium-up things are inspired by Ahmad Jamal's stylish trio sound anyway.

P.S. Strayhorn contacted me through the ether and wanted me to let you know he has mixed feelings about being left off this list.

Brew-I have so many memory lapses that all my blog posts should carry a disclaimer. The truth is out there somewhere...

Ian-"thank god" is a far better response to having asked the question than many other ones possible... I thought of Strayhorn, but didn't think of him as a trendsetter, like Diz or Monk, or as caucasian like the other horn-rimmed guys.

Steve -- The Truth is: I love both versions of "The Surrey With The Fringe On Top", and one of the others has been performed without glasses: Nat 'King' Cole's at "The Sands" which is wonderful too.

As for Strays, I think he doesn't mind. -- By the way would Clarence Williams be #1 of the hep cats anyway:

Another trombonist who fell into line: Bill Harris.

Rudy Van Gelder was an Optometrist before becoming a producer...maybe he carried on doing a bit of work on the side and hence so many jazz greats wore specs!

Early Bill Evans looks really cool in the JFK / Malcom X type specs...starts to lose it by the 70's in big avaiators.

Van Gelder as anal-compulsive optometrist; sounds like a Roger Corman movie waiting to happen. Happily, his patients were allowed to provide their own anesthesia.

Very much after the fact: the gent identified as Doc Cooke seems to be Clarence Williams, although I might need to clean my glasses to be sure. Cheers, Michael

Michael-Clarence and Doc may have been separated at birth, but since I only wear glasses for reading, I will claim that they are not the same person and the photo is Doc.