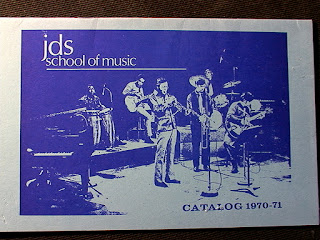 In 1971, this callow trumpet player enrolled in the Jack's Drum Shop (J.D.S.) School of Music. Even though the institution flashed only briefly through the dense Boston musical educational firmament, it was The Real Funk and deserves a nod.

I started out at Berklee College of Music (changed from "School of Music" in 1970) which, at that point, was not the enormous operation it has become. Berklee was housed in an ornate and slightly decrepit hotel at the other end of Boylston St. from J.D.S. Walking down Berklee's one central staircase was largely a question of avoiding bruises from a minefield of saxophone and drum cases (at that time, there were relatively few guitarists).


In my third semester, I was publicly humiliated by a composition teacher for building a "free" section into my final composition and, fed up, I left. I saw an ad in the back of Downbeat magazine for J.D.S. and signed on.

J.D.S. occupied the second floor of an office building in Park Square, a smaller scale and less ornate version of the late 19th century Boston architectural style that brought us Filene's department store (the site of which is now two walls with a 3-year-old construction hole behind it, but I digress).


Other useful businesses on that side of Park Square were the bus station, the Playboy Club (fleetingly), the Hillbilly Ranch (yes, country music in Boston) and the "Teddy Bare" Lounge (see photo below).


For a couple of years, all three floors of the building were busy. Jack's Drum Shop founder, Jack Adams, had two grandsons, Alan and Ron Vater. Their godfather, Fred Maichele was making drumsticks in the basement (eventually, Vater drumsticks would be used by Philly Jo Jones and Buddy Rich), the store was on street level and the hero of our story, Jack's Drum Shop (J.D.S.) School of Music was upstairs, behind a large plate glass window that looked out onto the Boston Public Gardens.


The school was organized for JDS by Jack Wertheimer, a trombone player and teacher. I was able to locate Jack through jazzhistorydatabase.com. Turns out he's been active in jazz in Central Mass and has a record label called Brownstone Recordings. Jack very kindly sent me the original JDS material you see interspersed through this post.
There may have been an interior staircase leading from the drum shop on street level, but the only way I remember going in was by a fire escape outside the building. I recall that it had been converted to carpeted wooden steps and that not only the carpet but the steps themselves were worn to the nub; a surprise in every step.

The interior was compact. I remember a room that could accommodate a few people for classes, a larger space, with risers good for big band rehearsal, and 3 or 4 practice rooms. There were locks on the practice rooms, but the usual method of entry was a credit-or most likely a library-card slipped down a loose door jamb. Sound proofing was a couple extra ceiling panels nailed to the walls. 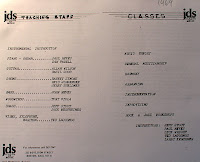 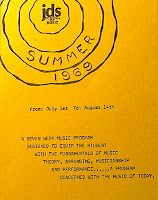 At J.D.S. I found a place where people were serious, but the gloss of professionalism was tempered by the love of the hang and mutual empathy for others locked in The Jazz Struggle. Students came from across the country, but I think many were, like me, refugees from more mainstream institutions.


I don't remember classes starting before 11 AM. It was not a crowd of early risers. By noon the place was littered with cigarette butts tossed into coffee cups and occasionally, by mid-afternoon, a pint or half pint of Old Crow would make its surreptitious way around the room.
There was a minor rivalry between me and Larry (last name?) for top spot on the lowly trumpet ladder, but if there was any serious sense of competitiveness among us, it was between Victor Brasil and Bob Mover. For those who don't know Victor's playing, check it out here: http://youtu.be/2zbPWUkj_os Now, check out Bob (they got the same gansta alto lean)- http://youtu.be/ifOU_4mobH8


Now, imagine those two doing battle during what was supposed to be a big band rehearsal. One comping on piano, the other channeling Bird/Konitz/Woods on the alto, then switching, each riff growing increasingly ferocious and aggressive. MInton's recreated. Or imagine Claudio Roditi, standing in the narrow hallway, demonstrating how different trumpet players would handle a set of changes: "So, if Freddie was gonna play this, this is what it would be..." "And Clifford would play it like this..." We flunkies sitting there with our chops hanging out.


The Teddy Bare Lounge down the street, like other strip clubs at the time, used an organ trio; always with a tenor player as the horn. At J.D.S., you could climb the tenor player ladder from being ignored, to being asked to sit in, being asked to sub and finally getting the gig when the tenor player went on to something better. When one of our own, Jim Davis, did just that, we aspirants all felt as though that seemy, infinitely desirable world was actually available to us.


One morning, in the middle of a semester (I guess we had semesters), a guy with horn-rimmed glasses wandered in. He walked through the rooms, seeming to take an unusual interest in the furniture and the condition of the walls, taking notes on a pad of paper. No one said anything except "who was that guy," but everyone knew who he might be. When we showed up the next morning, Jack told us the school had been closed down. 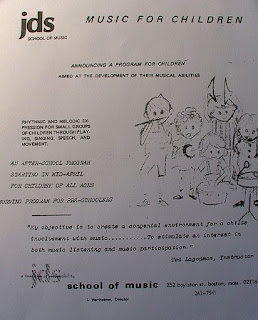 I recognize that this blog post is closer to a impressionistic retelling than an authoritative one. Mea culpa. But in an era when U.S. economics are working so strongly against those in the middle and below, there was something of the working class about this place that should be noted and esteemed. Like pawn shops, places like the J.D.S. School of Music were affordable and no nonsense, but not the zero-sum game that conservatories seemed to me to be. The teachers were Us, or at least we hoped they were and with no walls between us, we could imagine it was so. JDS thought seriously about its responsibility to the community, making jazz education affordable, sponsoring concerts, creating the Jazz Wagon and offering music programs for children.

At this point, the cost of jazz education has skyrocketed and Park Sq. has been de-natured and up-scaled. What now stands on the spot occupied by J.D.S., The Teddy Bare Lounge and the bus terminal? The Four Seasons Hotel (Minimum $495 per night) and the Heritage on the Common (studio condos start at half a million bucks). 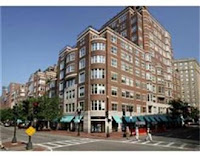 Posted by Steve Provizer at 5:54 PM

Great story Steve - early jazz education........ As someone who started a jazz programme in Dublin 25 years ago, that began with a 'pay if you come to class' policy, and now has 100 full time students, I love these belt and braces stories of how jazz education used to be before it became the massive thing it is now. Great photos too.......

Thanks, Ronan...I guess the DIY concept is the way young people see the idea of building small institutions. I may be wrong, but I do fear that the computer revolution tends to make for more isolated individualism in these kinds of efforts and a less nurturing group sensibility.

nice evocation of a vanished piece of Boston jazz arcana

Thank you, sir. I remember how disconsolate you were when the Teddy bare closed...

Thanks, Steve. I remember hearing some of those tales from you back in the day- I believe we met in 1974 when I joined the "Solo Flight Band." Nice to see them fleshed out, the stories, not the Teddy Bare dancers, although...maybe both.

Guess we're about the same age - I was at Berklee 1972-77 and remember JDS. Thanks for the details and the time trip! It was a very cool time for jazz in Boston. Now, write about the all-night concerts at the Old West Church. Mark Harvey must still be around.

Tony-
Cool that you remember it. You didn't go, did you?

Yes, Mark Harvey is definitely still around and many of the guys who were with him back then still are.

What a blast to find this blog. I attended JDS and remember some other instructors not mentioned. Lance Gunderson (guitar), Wayne Clifton (guitar), and Roger ?? whose last name I wish I could remember. Roger taught music theory and other subjects. I can't remember what instrument he played. The most fun I had there was playing bass in small group jam sessions with Artie Matthews and others.

Richard-Fantastic that you found the blog and checked in! I'm afraid I can't get your face into my brain, but Lance and Art for sure and how could I forget Roger? Roger was constantly running out of class to feed the parking meter. And do you remember the fake books that he put together himself and sold from his trunk? Man, I think I still have remnants of it around...So happy to have you as a reader. Best, Steve

I still have a copy of one of those fakebooks on my shelf at the piano! On the title page it says "The all-purpose, get-you-through-any-gig, super-up-to-date, super-organized FAKE BOOK". :-) So you don't remember Roger's last name either? I thought he was a great teacher.

No, I don't remember, but one of us may wake up in the middle of the night with his name...

I don't really remember his teaching; just that he constantly looked out the big window looking for meter maids on the prowl.

Steve, I didn't go to JDS, went to Berklee 1971 - 77. I remember Victor Brasil, he was wonderful. Studied w Mover when he returned to Boston in the 80s, also wonderful player. All the cool funky Boston jazz-era sites, gone, alas.

DONNY SILVERMAN WRITES: just read your piece "Brilliant Corners"...and wow...memories...I grew up in Boston, and was at Berklee during that time, and got to hang and try to jam with a bunch of those Brazilian madmen...i learned so much from Alfredo Cardim, Haroldo Mauro, Guilherme Rodrigues (RIP,) Zeca Assumpcao, Alyrio Lima...my friend Pete Chavez had a band w Claudio Roditi, Raul de Souza, Zeca...I d go see them at Pooh's Pub....they turned me on to such great stuff...Gilberto Gil, Moacir Santos, Milton Nascimento.... and played the happiest, sexiest music Id ever heard....starting a love affair that has continued all these years. After a year and a half, I took a recommendation from my first flute teacher, John Payne, and signed on for the next several years with Charlie Banacos (RIP) who remains an inspiration 40+ years later... a couple of beginning sax lessons with his buddy Jerry Bergonzi...what great stuff that was...i was so fortunate to have been there then....

I started to look for Paul Need, and happened on this blog. My father had law office up the street. He did some legal work for Jacks, and I got piano lessons with Paul as a barter arrangement. I was inspired to play music for my entire life through being around a great musician. My father bad years before hired George Erin to play piano in his Chinese restaurant in Boston's Chinatown to attract customers. He gave George the idea to start the Newport Jazz Festival as well. This is substantiated in George's autobiography. Thanks for some great memories of Jazz and music in Boston during that time period.

Rich-Thank you for your comment. I bet you have a lot more to say about the Boston jazz scene.

Nice of you to say so. Steve

Glad you got something from it, Justin.