Shop TIl You Bop 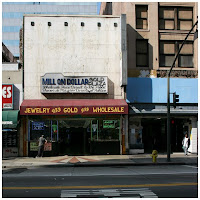 I received a brilliant, well-researched comment from the "LA Pawn Shop" for my post "Wassup With the Jazz Blogs? To wit:"If you need a convenient loan fast, the Los Angeles Pawn Shops is one of the best loan service provider.[sic]" Great to know I'm reaching the retail community.

I know what you're thinking: Gee, Steve, I know you wrote about pawn shops and jazz. It's too bad you missed the chance to hop on the bandwagon of pawn shows flooding TV: Pawn Stars, Hardcore Pawn, Cajun Pawn and their inbred step-cousins, Storage Wars, Auction Kings, Antiques Roadshow, etc.

Well, as Carnak the Great might have said: "You are wrong, Stickley breath."

At this very moment, we at The Institute have several programs in development at our Burbank Jazz Video Laboratorium. Some of the titles are a bit infra, but we're above the nasty little scramble for ratings that drives our moronic competition.
Appointment viewing.
Posted by Steve Provizer at 4:46 PM 10 comments: 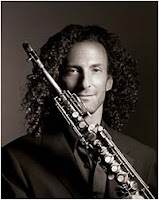 Do I like his music? No. Do I want to listen to it? No. But, like a jazz Beatrice Hall, I will defend his right to play it.

I'm goaded to this position by the response I've seen by some people in the jazz community who took the opportunity to revel in his recent divorce. This is the lowest kind of schadenfreude. It's aimed at a person when it's really about something else.

Do musicians think he was stealing their audience, that the millions of cd's he's sold have kept their own releases from flying off the shelves? That pins out the level on the Self-Delusion Meter.

Listen, people, I know the dilemna of the jazz musician, My own adjustments to the ratio of practice hours to gig fees started early and have never stopped. Who knows why Kenny G.'s brand of syrup triumphed over the hordes of sax players who play the way he does. Maybe he's cuddlier than they are. Whatever the reason, his ascent has marked him as a jazz lightning rod/scapegoat, repository of ill-feeling toward all that's wrong with the American audience and the music industry.


We probably know babkes about the man Kenny G., but whatever we know or think we know, the guy is different than the music. Divorce is tough. Let's start there.

About 125 people turned out last night looking for ways to improve jazz radio in Boston. Reps from the major Mass. jazz organizations were in the house, as were a lot of musicians, dj's, promoters, producers, bookers, just plain listeners and the two guys who are in the center of this whole thing-constrained WGBH jazz host Eric Jackson and ex-WGBH jazz host Steve Schwartz.


No matter what arises in the wake of the meeting, it felt great to be a part of that wizened, caring community.


It was a lightly moderated forum, with no serious mic hogging. There was a certain amount of sheer venting as well as a lot of concrete ideas. I assume jazzboston.org, organizers of the event, will post what was discussed. I also know that Dick Vacca is writing it up for the JJA. Find details at those sites. My comments will be general.
There were some younger people there last night, including a 19-year-old who said "My generation doesn't listen to the radio." A sobering thought, although not quite accurate. They do listen: to KISS, JAMN WBOS, WERS at night and maybe a few other high wattage stations; not to jazz. As noted last night, education is an important part of growing an audience. The difference between stumbling across a disembodied track by Herbie Hancock that you like and having a knowledgeable DJ put it into historical/cultural context for you is huge.


This is just to say that any strategy undertaken to satisfy the current jazz audience and to grow a new one has to utilize both old and new technologies. There was a lot of energy to try and force redress from WGBH or to approach WBUR, but the current diminished size of the jazz audience means that no high-powered station in Boston with a big monthly nut will take a chance on jazz. Let's concentrate on utilizing those college and smaller non-commercial stations that have the flexibility to be supportive.


In terms of newer technology, a Boston Jazz Stream would not be free, but with all the knowledge we hold, it's almost a no-brainer. In terms of social media, we have a long way to go. Last night, someone asked how many people in attendance blogged, Facebooked and tweeted about the meeting and I was shocked that so few of us raised our hands. C'mon people. I know you got the smart phones. That's what they're for. 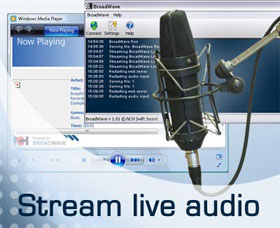 [Ed. note: In the next week or two, I'll be posting an interview with Steve Schwartz.].