Busted by the Feds 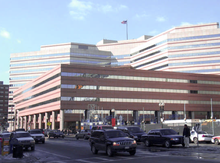 I had business in the Tip O'Neill Federal Office building here in Boston. In case you haven't been to a federal building in a while, this story will stand as a reminder you that you have to go through a "security system" to get in.

Alright, for reasons outside the bounds of this story, I was already in a bad mood and was pissed off to have to go through this process. My choler rose as I watched four dour, pokey security cops tell regular people to empty their pockets, take off their belts, their jackets, run the metal detector wands over them and all the same crap you have to go through at an airport. I began to grumble and the guy behind me joined in, albeit more quietly.

Then it was the turn of the two people in front of me. They were a Muslim couple, pushing an infant in a baby carriage. They had to completely empty the carriage, then the guard ran his hands through every fold and cushion, as well as lifting up and examining the bottom of the carriage. All my thoughts about living in a police state rose to the surface.

Now, my turn. I emptied my crap into a bin with an obvious attitude and the guy didn't like it. He told me to empty my pockets and I told him I already did, but not in the obsequious, compliant voice that you're supposed to use with the minions of power. He picked up the bin and told me to get out. I said I had a 10:30 appointment. He said "get out and come back in an hour, when you calm down."

I picked up my crap and stomped out. When I pushed open the outside door,  I heard it slam against something. Ten steps later, three cops surrounded me, as did one guy in civvies. I don't know who the guy in civvies was, but the cops were letting him talk to me. I think he was simply trying to determine if I was "dangerous." I guess he thought not. The eldest one-a regular Boston cop-had a cool head. Maybe he's seen people slam doors at the Tip O'Neill Federal Office building before. In any case, he told me to go back through the line and that we would deal with the problem after I was finished with my business. 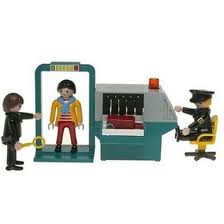 As I passed through the security checkpoint, the guards stared at me with gimlet eyes, ready to pounce, but I got through Checkpoint Charlie successfully. While I waited in the social security office to be seen, one of the cops came in and asked me for my drivers license.

When I finished my SS appointment, I was directed back to a cluster of cops, where my license was returned and I was given a "citation" awarding me $500 for being a model citizen and standing up to the depredations of the Man. Well, no. I was actually fined $150 plus $25 "handling charge" (they won't let scalpers do it, but they do) for "destruction of federal property."

Alright, not a tragic story, but one that leaves a few impressions.

First, as my wife reminded me, I will now be on every "watch list" at airports and god knows where else.

Second, this story is not evidence of a particular guard's racism toward Muslims-at least I hope he would exercice the same mindless thoroughness with a white couple. However, it does highlight the innate stupidity of the system.

Third, it remains infuriating to me that you can't behave as a normal human in the presence of a cop. You can't say: "get to work, I'm paying your salary" to a cop on his cel phone, collecting serious money for not directing traffic at a construction site.  Lawfully following instructions is not enough, your "attitude" has to fall within the proper obsequious guidelines.

Fourth, if I was African-American, I have a strong feeling I wouldn't be able to post this on my blog until I got out of the local lockup and a tentative court date had been set.

Posted by Steve Provizer at 5:00 PM

Thanks for this off-jazz article, Steve --

Well, as I see it, as hobby psychologist Prof. Dr. Brewster Liteheimer, it's all about paranoia, about a growing feeling of insecureness, and also about shame.

Shame? Exactly. Because while they're treating normal people like you, or the Muslim couple this way, they appear as being strong, they seem to be in control, but they know at the very same time:

'If one really wants to drop a bomb here, we would be as helpless as the harmless folks who have to empty their pockets.'

That's why they are so pissed when someone doesn't obey immediately.

Now, feel free to click on my name and get hep!

Brew-I basically agree with your assessment. Fear clouds judgment. For my part, there are times when it becomes more than I can do to suppress my own anger at the situation, even though I know it can come back to bite me in the ass.

I was taking my dad to the SocSec office in Orlando several years ago. We went through the line at the Fed Building. My dad was stopped because he forgot to leave his pen knife at home. The guard held it for him until we were through at SS. We picked it up on the way out. I guess it depends on whom you face when confronting the authorities. I'm surprised they gave you a citation when you didn't offer anything except grouchiness. Seems to me there must be a place to offer a complaint about your treatment as it seems extreme.

Teg, Thanks for your comment. Each situation presents different possibilities-for better or worse. I'm glad yours was better. I'm not sure if there's an avenue of complaint, but I am sure going to contest the fine.

Good luck with that. Their job is to get people through that line with the least fuss. You have to remember, this is a federal building. That means that, as in an airport, there are a wide range of outcomes to someone in a bad mood. In your case, it was just a slammed door, but in others it could have been a locked-on timed vest or a concealed weapon. I think the fine is fair; you cost them time, and you triggered some reflexes by your actions. It may be an annoying process, but it's a necessary one. You would have done better to just smile and nod and get through the damn line. Your last line is just petulant.

You're right, of course, that I would have done better if I had etc.. But-while you can reasonably argue that writing the piece was petulant, if any one part of it was NOT petulant, it was the last line.