"The Myth of 'The First'" by Steve Provizer


Id'ing the first of anything is alluring; even better than finding the Biggest Spruce Tree or the Skinniest Model. Arguing about the First Of Something has the same kind of endless circularity you get in a stoned conversation about "Best Of's." It can be enjoyable as long as no dopey egotist who needs more sex (Hey, that's me-at least the dopey egotist part) holds tight to their own opinion about, say, what the Best Bird Solo is.

In non-art First Of's, taste is supposed to be less of an issue. Shouldn't we be able to tell who invented something? But it turns out to be very blurry, indeed. In science and industry, you often have multiple people finding the same solution, one of them getting it out first and the other disappearing. Equally often, the person who did something or discovered something is superceded by the person who successfully marketed it, bought the rights real cheap or simply swindled them out of the rights, the patent or the glory.  We always seem surprised when we learn about these episodes, even though they seem to be as much rule as exception. It's the Winners-Write-History thing.


There's two directions I can take at this point. One is to make fun of the whole business by trumping up bogus Firsts. Say, The First Drip Painter to use Cyan, or the First Accordionist Who Didn't Play Lady of Spain. 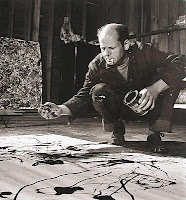 The other direction is to question the whole premise of the "First;" at least in the case of popular music. To me, the First idea is of a piece with the Linear Development of Jazz theory. There may be one vector that is more energetic than others (New Orleans and Up The River), but there was simultaneous activity in many parts of the country-San Francisco, New York, Denver, not to mention that something like the blues was being sung and played in most of the South and tunes were being "ragged" all over the country.


In the same way, blues, boogie-woogie, jive, big band and small band swing, stomp, western swing, jump, gospel, were all spinning out by the late 1930's. No doubt a lot of the cross-pollination was not recorded, but it's insane to think that those threads were not being woven at the same time in many parts of the country into the skein that consensus would-in retrospect-call rock and roll.
Posted by Steve Provizer at 4:58 PM