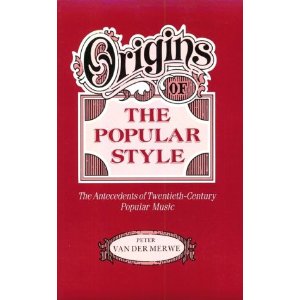 When you reach into the faux-velvet bag, there's a feeling of infinite possibility inspired by the virgin letters nestled inside. But you can only get that feeling after you’ve swept the last set of painstakingly-created words off the Scrabble board.
Oddly, I went through the same process when I read Peter Ven Der Merwe's book-Origins of the Popular Style. The intensity and detail of his musical analysis broke down musical structures to the point where they began to destabilize and eventually float free. More and more, I understood the weight of the baggage I bring to the act of listening to music. As obvious as the idea may seem, it was startling to actually feel that melody, harmony and rhythm are just raw material-free radicals-waiting to be recombined by creative musicians.

Living with this feeling for a while led me to realize just how radical an influence jazz has had on popular music, especially the Great American Songbook. It's not as big a leap as it seems.

There was always some dialogue between "popular"music (parlor, spirituals, blues, ragtime) music and "classical" music (opera, symphonic, etc). Classical composers sporadically infused their work with popular material while, for popular music, the appropriation and reconfiguration of musical raw materials has always been meat and potatoes.

But the way that jazz undertook this process of reconfiguration broke radically from the past.
Jazz began, as other new popular music genres had, with simple variations, ornamentation and new inflexions. Improvisation was moving toward the center and that in itself was new, but was just one part of the radical shift. With each new decade, the proper job of the jazz improviser increasingly became to disconnect a song from its original moorings. Each player needed to be a re-composer, listening to the musical flesh and bones of a song and then re-imagining, rearranging and filtering these through a jazz lens. What emerged was not a new "version" of a song, but a new song entirely, one with more flexibility, more elan and emotional weight. If this meant "disrespect" for original intent, so be it: Just Swing It@ (keep away, Nike).


Because jazz musicians performed this alchemy, a repertoire survived that otherwise would have been consigned to the musical dustbin. Or, at best, occasionally resurrected as a cultural curiosity. This includes much of the Great American Songbook. 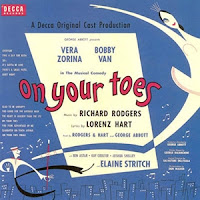 Radical notion? Look at the oeuvres of the great American composers- Kern, Porter, Rodgers and Hart, Berlin, etc... Almost all their work was written for theatre-some for movies. If the only time we heard their songs was in the theatre or cinema, performed as they were originally intended to be heard, we would either engage with that material as nostalgia or, more likely, leave at intermission.

Over the past century, songs that would have otherwise been discarded as archaic and stilted have been continually resurrected by improvisers, who brought fresh ears and ideas, releasing a sophistication, subtlety and power that would otherwise have remain untapped. To use a "green" metaphor, jazz took in banana peels, lemon rinds and egg shells and turned them into rich dark compost.

Of course, there were Great American Songs that even in their inception were not in need of reclamation. These were often written outside the theatre, for nightclub reviews, or specifically for or by jazz musicians (chiefly Ellington, Fats Waller, Harold Arlen, Hoagy Carmichael and Gershwin).

But there are so many examples that support my thesis. I give you a few here, but feel like my role is to lay the concept out and that many more examples will come from you:

that's Bubber with Reisman, after Ellington kicked him out.

George-yea, of the non-jazz musicians, Gershwin and Arlen had the most jazz influence in their writing.

Some of the early renditions of their tunes would make a person cringe a bit now, but their material may have been the most "self-sustaining."

One of the fastest "Lover's" ever here, with Trane & Don.

There you can hear the difference between pure, raw genius, and solid, but not very spectacular handicraft.

It's impossible to think at that speed. You have to let it go, otherwise you'll lose.

As for another, similarly brilliant demonstration of speed-jazz, I always play another great song of the American Songbook for my students:

Sonny's & Hamp's solos on "The Song Is You" on "SR & The Contemporary Leaders". This is pure fun, and I always have to laugh in disbelieve, even after the many times I have listened to it in the meantime.

It's one of the most awesome tracks in jazz history, and it comes very close to Bird's "Koko", or Bud's "Tea For Two", or to the above Trane on "Lover".

Brew-I guess this means you like that version better than Deanna Durbin's...

Let's give Byrd props for hanging in and making the changes at that tempo, which I make at about mm=360

Nothing against Deanna Durbin, 'cause she really sings beautiful; otherwise you wouldn't have posted that link, would you?

No, he plays very good here, Don, and his phrasing is very accurate, and you can hear his brilliant technique, no doubt about that. I wished my technique would allow me to play at such a speed.

But my goal as an improvisor is just different. No need for speed, just because of speed's sake.

And when I would play a speedy thing, it would kinda free-bop, and one of my own compositions.

I would place Hoagy Carmichael in that highly jazz influenced.Pantheon....his songs so often sound like they are full of Bix breaks....hell....Stardust sounds like a whole Bix solo.

Interesting that you blogged this.....I've been listening to Sonny Meets Hawk and am really blown away by the freedom in Paul Bley's solos.....he delineates an entirely new way to approach the standard for pianists.

Chris-yea, I did list Hoagy, for sure. Paul Bley is a very interesting piano player.

Brew-speed is its own discussion...

Yes I know, Steve. -- I recalled a discussion at Ronan's blog where he was essaying on today's youngsters who seem to be afraid of playing fast.

why did you not print my original comments? A problem with disagreement?

Allen-I don't know why your comment- to a different posting-never made it. There was nothing controversial about it. Our crack screening staff occasionally has to be sent out for re-training and flagellation.