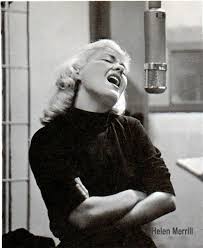 As we so often find with jazz performers, vocalist Helen Merrill started young-age 14 and from the beginning, she managed to be both mellow and edgy. On this 7.20.17 edition of the DuPlex Mystery Jazz Hour on WZBC, apart from her jazz work, you will hear a few recordings made to try to boost her profile outside jazz.

"Don't explain" "What's New" You'd Be so Nice to Come Home to" "Falling in Love With Love" from "Helen Merrill Featuring Clifford Brown" (Jazz, 1954) on EmArcy

"Dream of You" "Summertime" "Let Me Love You"  "I'm Just a Lucky so-And-So" Helen Merrill  arr. by Gil Evans, from Collaboration 1956 on Emarcy

"I'll Remember April"  "You'd Be So Nice to Come Home To" Helen Merrill  from "Brownie: Homage to Clifford Brown"  1994 on Verve

Posted by Steve Provizer at 2:54 PM