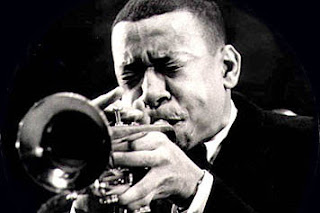 From the beginning, Lee's unique, instantly recognizable tone was there; slightly hard-bitten, slightly burnished, usually aggressive, but sliding into sultry when necessary. There are times, throughout his career, when he played things that might have almost been played by someone else-runs by Bill Hardman or Donald Byrd, or repeated phrases with small variations, a la Clifford.

But then, you add in the rest of his vocabulary-half-valves, notes spit out like expletives, deft ornamentation, trills, false fingerings, lightning fast triplets-and you have a complete and unique grammar and vocabulary. Put all that under the umbrella of Morgan's tone and even a fairly typical hard bop pattern rings differently in the ear; singular and original.

Morgan's first album as a leader and, in fact, his first recording, was "Indeed," for Blue Note in November, 1956. Horace Silver is on piano, Wilber Ware on Bass, Clarence Sharp on alto and Philly Joe Jones, drums. The first tune is a ballad, the second is a burner. Here's "The Lady:"

Next is "Reggie of Chester."


His approach to the ballad shows a strong Clifford influence to me, which means not only note choice, but modulating his tone to accommodate those choices. In "Reggie," he is clearly on terra firma. The Morgan tone and syntax is solid, and influences seem like afterthoughts. 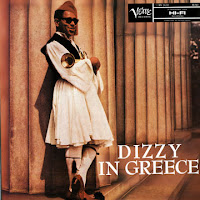 In April, 1957, Morgan recorded several tracks with the Gillespie big band that ended up on an LP called Dizzy in Greece (last 3 tracks on Side 2). Why they called it Dizzy in Greece, who knows, although it did give Diz a chance to get his Zorba on.

Here's Lee, taking a nice solo on "That's All."

At this point, Morgan began to record often-5 albums were released under his name in 1957. One of these was The Cooker. "Just One of Those Things," from that LP, has to be heard:


There's so much material...I'll wrap this up with a very pretty Latin tune Lee wrote called "Ceora," from a 1965 release. With him are Hank Mobley tenor, Herbie Hancock, piano, Larry Ridley, bass, Billy Higgins, drums:

FOR TRUMPET PLAYERS: Here are a bunch of transcriptions of Lee solos that you will have a ball playing. Big thanks to Jeff Helgeson's blog and jazztrumpetsolos.com.

Hey, great article on Lee. I've always loved his playing. Didn't realize he hung with McCoy! I played drums in an Art Blakey tribute band for a short time in Austin, and got very accustomed to the Lee Morgan sound. What an influence. Seems like he is appreciated more and more as years pass.

Thanks, Jeremy. Yea, I think as the years go by and Lee's sound remains so unique, appreciation will grow.

Philly at that time was an amazing scene. I highly recommend the article by Jess McMillan I link to in the post.

Terrific music and insights, thanks so much for this!

When I talked to Dizzy about my greatest hero Booker Little, he quickly replied with: "Yeah! Lee Morgan & Booker Little!"

I think Brownie's unexpected early death was a severe shock for young Lee Morgan; and many of his later problems can be explained with this great loss.

Brew-You may be right about Lee's response to Brownie's death, although Lee did seem to have a pretty solid structure of family and friends in place as a teenager.

But the sudden demise of a very close friend, who was also a soul brother, musical colleague & master at the same time can be a deeper break than the passing of one of your family members.

By the way, have you ever heard this?

Interesting, Brew. Thanks for posting that interview. Morgan's death is like Rashomon. There seem to be so many ways to see it.