Louis Armstrong: Operatic at the Core. The jazz world started to get down on Louis Armstrong starting around 1950-the beginning of his ascension from jazz star to Star. And since the 1980's, at least, jazz people have been trying to make up for calling Pops an Uncle Tom, a sellout and a cultural irrelevancy.


"What a Wonderful World," Ricky Riccardi's biography covering the last part of Armstrong's career, might be one of the last chapters in the jazz community's process of expiating its sins.


This book is what's known as a "workman-like effort" and a "good read." The writing is fine, if not compelling. The level of detail about his concerts, recordings and band personnel seems sufficient. The book does little to place Armstrong in the broader American musical context, but it deals with one issue pretty thoroughly and pretty well-Armstrong's complicated attitude toward race, including how it plays out with his long-time manager, Joe Glaser. 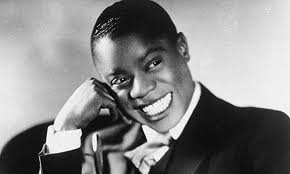 The book covers many bases, but it does not fully address what is, for me, the essential question about Armstrong: What really made him the ablest communicator in jazz history?


Yes, he had fabulous musical skills, incredible gifts as a showman and the willingness to work like a horse. But I think there was something else at work.


Armstrong said many times that he loved each note, whether he was playing it or singing it-and his singing voice was emotional twin to his trumpet tone. What I think he was talking about was not the pitch or the combination of the notes, it was the tone and the weight of each note.


Hundreds of gifted and proficient trumpet players have come and gone through jazz history, but no one has ever had that tone. Not even close. Yes, others have had an identifiable sound, but their tone basically falls within the parameters of a given historical era. Give me the name of an early jazz player, a swing era player, a bop player, a free player, a neo-mainstream player and I can name you other trumpeters from that era who had a sound that was very similar.

Even though he always talked about his debt to his mentor Joe Oliver, Armstrong seems not to have been subject to that need for identification. His tone rides over jazz history as freely as his solos rode over orchestras and rhythm sections. I believe that Armstrong's singular tone sent a unique message to the listener: "I am making myself completely vulnerable to you. While part of me is acting (and Armstrong's acting talent was unassailable, if underutilized), part of me will die if you don't love what I am giving to you." 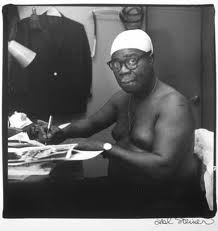 Emotionally, his performances were not pitched at a jazz performance level. They were operatic in intention. And, as Armstrong aged and took on lesser pop material, this became easier to see. He was able to impart a depth to those tunes beyond that ever imagined by the songwriters and arrangers. Because, really, it wasn't about the notes. It was about The Note.


Nearing the end of his life, who did Pops draw on as reference points when voicing his distaste at the pessimistic media coverage of his declining health? Not jazz people. As quoted in Riccardi's book, he says: "Everyone wants to know how I am going to die...I never was interested in the life of Caruso or the death of Mario Lanza..." He loved his fellow jazz musicians, but in some way, he knew his peers were opera stars.

Posted by Steve Provizer at 4:42 PM