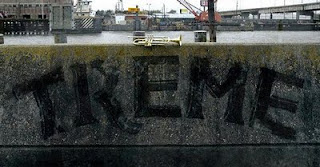 Alex Pappademas just pulished a scathing piece, The Frustrating Unlikeability of Treme. The title implies that the author wants the show to work, but his critical faculties just won't let that happen. That's hard to swallow, given the ferocity of his critique. This might seem a small nit to pick, but this apparent contradiction says to me that Pappademas has not come to terms with the extent to which he does or does not root for the home team.


I'm not asking anyone-even a critic-to suspend critical judgment and I'm not saying you HAVE to root for New Orleans, but there is a touchstone "whose side are you on" question here that you have to come to terms with. If you're gonna analyze Treme, show us what emotional investment you do or don't have in the crisis and musical glory of that city.

With little or no emotional investment, it's hard to care about the characters and easy to see a "shaggy dog narrative" and the notion that "Treme behaves as if genre is a crutch..."(is the word "genre" really what he wants here?).

Sometimes the show makes me cranky too. I'm not much for symbolism-soaked rain songs and I think that when they recorded the theme song for the opening, they squeezed the juice out of it. Various other issues flash through as I watch the show, but I don't think much about whose image it burnishes, or what authorial grudges are supposedly lurking as subtext. I'm a musician. I like hearing almost all the music and love hearing some percentage of it. I am invested in and care about the characters.


I'll end this with a quote from my friend Diana, who responded this way:


"It's been so surprising, every week, that the writers of Treme get so much right. So very much spot-on to what we all saw, felt and said - even in that "unhurried" New Orleans way. Indeed we do pause our own narratives to watch a parade or listen to music in a bar. That kind of momentary bliss makes a community and provides for a necessary release in the face of the post-K bureaucratic nightmare."
Posted by Steve Provizer at 1:21 PM

Lave it or live it. There's been NOLAck of X-Treme responses in the past half-decade, from "let-'em-sink, they-deserved-it" remarks (usually racist); to angry anti-Shrub caricatures and "FEMA? You mean FEEBLE!" sneers; to unimaginable outpourings of aid, cash money, and work pilgrimages by (extra)ordinary citizens; to Spike Lee's multi-part documentary indictment, and dozens of CDs issued in tribute to a great and unique wellspring (poor choice of words, I guess) of American Music, raising funds to bolster unEasy artists and dead-slow recovery. Brilliant or boorish, Treme should be seen, heard, and lifted up... lest we forget.

FYI, the John Boutte recording that serves as the theme song/opening credits existed long before the show.

I am a bit ambivalent about the show. I want to like it, and often do. I watched the first season religiously. I have missed some of this season, and it doesn't bother me too badly. I like seeing friends on TV. I feel a little too close to the whole thing to objectively judge it on its own as a TV show.

Jeff, thanks for the info. It does bring up the difference between the music on Treme that is pre-recorded as opposed to "live." To my ears, the live, club/festival/ street sound woks a lot better in the context of the show. As isolated listening experiences over time, a person might choose the carefully recorded versions. Who knows...

I understand your ambivalence. I guess one of the main ideas in my post is that a bigger slice of emotional subjectivity has to be factored in when evaluating this show.