Mute regrets, I've had a few. Like, Why did the great Roy Eldridge start using a harmon mute? 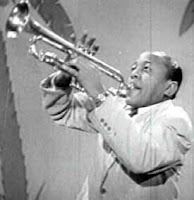 Roy's tone was a pile-driver; epic, a mover of mountains. It vibrated at the highest energies. Just listen to what I think is the ripest performance in the history of swing:

"The 7 Ages of Jazz-Kind" by Steve Provizer 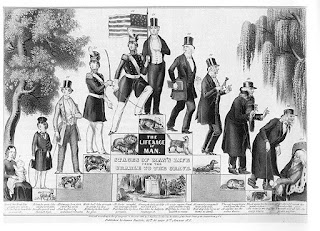 Watching my daughter and I find that she's been co-opted by pop music and is currently off the jazz stages list, but thought I'd repost it for other parents who are trying to evaluate their offspring's development.

With apologies to Shakespeare.

I. The Infant:
Muling and puking. Parents play music at home and, too young to put up a struggle, he is exposed to Ellington or Basie, maybe Miles; Nancy Wilson, Sammy Davis Loves Broadway.

II. Whining Schoolboy:
Creeps unwillingly to his trumpet lesson. Is drafted into stage band at school and learns how to play "swing eight notes" in Sal Nistico arrangements.

III. The Lover:
Simultaneously experiences the first pangs of love gone sour and the aching balladry of Billie Holiday, Stan Getz and Ben Webster. Rejects all other musics as unworthy of his devotion.

IV. The Soldier
Full of strange oaths; i.e., II-V-I, arco, flat thirteen. Looks for respect in the jazz-session trenches and is willing even to face the Medusa Donna Lee in Dflat. Draws his sword against any who would denigrate his jazz gods. Soul-patched, like the pard Gillespie.

V. The Justice:
In fair round belly, with wise lese majeste, he accepts the endless cycles of "Kind Of Blue" on jazz radio. He learns to shrug off the hype surrounding the latest wunderkind and begins to find truth in the notes of the elders.

VI. Spectacled and Slippered:
The search for the right mouthpiece fades, as does his once robust tone.  The silence becomes more meaningful than the notes.

VII. Second Childhood. Taps his toe to Louis and then is heard no more.