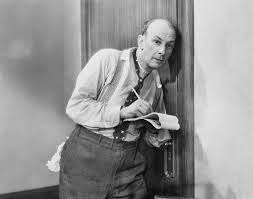 It's hard to argue with the exile of the execrable L.A. Clippers basketball owner Donald Sterling. The famous taped conversation apparently represents just another episode in a foul ongoing racist pattern. But I really wish he wasn't quite the jerk that he is, because his case gives the push-back against the loss of civil liberties a bad name.

We're in an era where privacy is undergoing a full frontal attack. Between public cameras, internet surveillance and NSA snooping, there just doesn't seem any limit to what people think they're entitled to know about us. Although I know the Sterling case is not "formal," as when government or media is involved, the idea that we have the right to know if our conversations are being recorded is being eroded, as is the premise that if you're told they're not being recorded, what you say in private won't be used to publicly hang you. The story of Sterling's loathsome behavior and subsequent punishment has the effect of, if not justifying, at least affirming the ongoing impingement on our right to privacy.

Do we really have to begin to guard all our private thoughts in a diary that is kept under lock and key? Do we have to sweep the room for bugging devices before we conduct intimate conversations? It creeps me out any time someone's private conversations are used to publicly hang them. I can't help thinking that someone at some time could have used what I said in my home to punish me; not racist rants, but I've had jobs and bosses that I complained about in language that could no doubt have been used against me. And god knows I've said things about the government that would probably get my butt in trouble.

So, go ahead and hang Sterling, but please don't throw the baby out with the dirty bathwater.
Posted by Steve Provizer at 4:20 PM No comments: 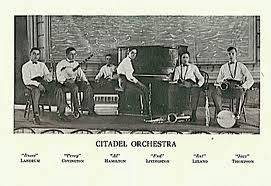 Joseph Anthony (Fud) Livingston (April 10, 1906 - March 25, 1957), Charleston, S.C. was a clarinetist, saxophonist, composer and arranger whose hey day was the 20's and early 30's. Listening to his arrangements from 1926-1930 was an eye opener to me. Fud uses a variety of musical devices from the jazz world and the "modernist" school of composition, resulting in arrangements that are stylistic anomalies. There were elements that were adapted into the classic "swing" big band style or were transmuted into the more bombastic "concerto for trumpet/clarinet" approach that we see in the late 1930's, However, the form itself, with its rapid juxtaposition between earthy blues/jazz and expanded harmonic conceits, largely disappeared.

Ben Pollack and His Californians "Red Hot"(1924) on Victor

The Charleson Chasers "Feelin No Pain" (1927) on Columbia

Miff Mole and His Little Molers "Imagination" (1927) on Okeh

Frankie Trumbauer and his Orchestra "Humpty Dumpty" (1927) on Okeh

Nat Shilkret And His Orchestra "Oh Baby"(1928) on Okeh

Fred Elizalde and His Music "Singapore Sorrows" (1929) on Parlophone

Paul Whiteman and His Orchestra "Choo Choo"(1930) on Columbia

Bing Crosby "I'm Through With Love"(1931) on Brunswick

The "Classical Tinge" in Jazz 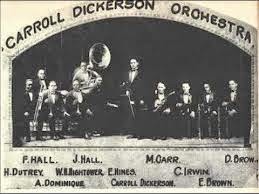 Jelly Roll Morton famously cited the "Spanish Tinge," but jazz has also been influenced by "classical" music. I'm calling this the "Classical Tinge." This began well before the term "Third Stream" was coined by Gunther Schuller in the 1950's. In fact, as soon as jazz-influenced dance bands (or dance-influenced jazz bands) began to record, we began to hear this happen. I hope you enjoy this look at some of tunes from 1920-1931 that had a Classical Tinge. 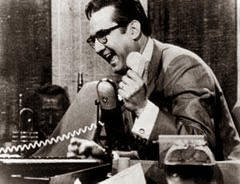 So, Stephen Colbert is taking over for David Letterman. Colbert is a fine actor, comedian, interviewer-even a good song and dance man, I'm told. And it's those talents that will be on display as star of "Late Night." His choice as successor to Letterman does not portend tectonic changes at media megalith CBS, which airs the program. His slyly transgressive persona will be persona non grata. 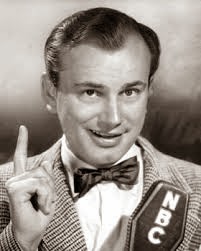 Can anyone believe that CBS will adapt it's basic economic structure to accommodate Colbert's shtick as a left-liberal masquerading as a right wing wingnut? Will they happily sacrifice a broad swath of their demographic, as the good natured political ribbing that has dominated the show-with resounding financial success-goes right in the dumper and the character Colbert played on Comedy Central is given free range to acerbically dissect the foibles of the American power structure? Rather than the usual fawning treatment, will the cavalcade of Hollywood guests (whose movies are produced and distributed by the same company that owns CBS) now be in for the kind of ironic diss served up on the Colbert Report? 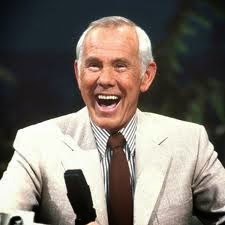 Sure, it could happen. If the sponsors of the Late Show decide they'll be happy to pay the same rates for a smaller and smaller but hipper and hipper audience. I'd be surprised. More likely, they will shave down Colbert's canines and reduce his bitter irony to a wholesome pap. Not too quickly, though. No doubt the network, the sponsors and producers will devise a strategy to woo Colbert's old viewers while reassuring the mainstream audience by slowly mutating Colbert from his current complex persona into something with the ring of the renegade, as has been perfected by the ad industry to sell jeans. 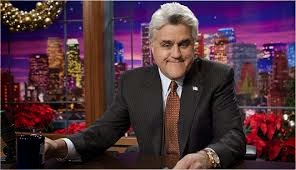 Colbert might change the multi-billion dollar culture of late night TV; and Chris Christie might get a job as a tolltaker on the George Washington bridge, but I'm afraid my money's on Proctor and Gamble, Mercedez Benz and Sheldon Adelstein. There's just too much money at stake. Meanwhile, good luck, Colbert, we love you, er we love your persona, we think we love you, but we hope that what we love is really you [voice trails off to infinite recursion]... 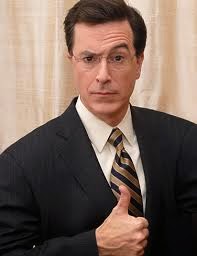 Posted by Steve Provizer at 12:22 PM No comments:


On the April 3, 2014 edition of the Duplex Mystery Hour on WZBC, guest Dick Vacca, author of the Boston Jazz Chronicles and I take a look at some piano players with a Boston connection.

Listen to the show.