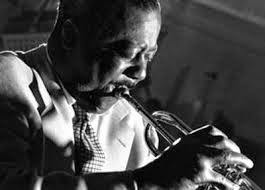 [I first wrote about Charlie Shavers a couple of years ago and since then, have noticed signs that increased attention is being paid to this great trumpet player (pure coincidence, I'm sure). I have expanded that piece, added new links and new commentary]

I first heard Shavers many years ago playing on Billie Holliday''s Verve LP "Solitude"- my favorite Lady Day record. Charlie's playing, both open and muted, was beautiful. I don't know why I didn't pursue his discography at that point; it just kind of spun out over time and I have grown to increasingly dig Shaver's facility, creativity and tone.

The only other swing trumpet players who could give Charlie Shavers a run for his money as both soloist and lead player were Roy Eldridge, Harry Edison and Buck Clayton. If you happened to like the particularities of their sounds, you might say Harry James, Cootie Williams, Bunny Berigan or Red Allen were in his league. Shavers' tone was basically 'poppin', but rounder, slightly less edged and with a touch more vibrato than the others. His range was unsurpassed, except by Eldridge. He used mutes to great effect throughout his career.

Shavers was an alumnus of the Tiny Bradshaw, Lucky Millinder and John Kirby, Tommy and Jimmy Dorsey, Benny Goodman bands and Jazz at the Philharmonic. He recorded and sounded perfectly at home in many styles-blues, traditional, swing, semi-bop.

There's a dearth of info out there about the man. There is one very cool interview with him here, and what he says about the trumpet will surprise you. In this interview with Bobby Shew, there is a reference to Charlie's having what seems to be narcolepsy.

Whether or not he had that kind of medical condition or not he seems to have been an extremely laid back possibly even passive, guy. It's interesting to speculate on how his personality interacted with his career-especially his recording career-as many of the recordings he made in mid-to-late career (he died at age 50) were not very good. Producers put him in settings they thought would make him appeal to a bigger audience. On some of these, he is simply a high note guy and on some, a "beautiful music" guy. He probably had neither the clout nor the personality that would have made him push back against any of these musical follies.

This is the Charlie Shavers Quintet in 1947 doing "Dizzy's Dilemna."

Here he is in 1952 with Eldridge in one of the classic JATP "battles."

One of the few clips of Charlie has him here in another fantastic "battle" with Buck Clayton:

Here he is holding down the solo and first chair at the same time for the Dorseys:

Here he is with his first major gig-John Kirby. Sid Catlett is fantastic:


And finally, here he is not long before his death. Dig the violinist Svend Asmussen. You might also recognize the bass player and the tenor player: 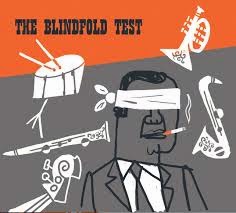 Listen as Russ Gershon, the brave and intrepid Boston bandleader, musician, composer, arranger faces off against the musical unknown. On the Duplex Mystery Jazz Hour, WZBC, 90.3 FM with Steve Provizer, 03/12/2015 5:00 to 07:00 PM.

Playlist. Don't look, if you want to play along.

Before his arrival:
Either Orchestra "Nutty Ode to Billie Joe" from "Radium" (1989), Accurate Records

Either Orchestra "The Petrograd Revision" from "Mood Music for Time Travelers" 2010, Accurate Records

Either/Orchestra "Hard To Know" from "Radium" (Jazz, 1989) on Accurate Records

Down to work:
Henry Red Allen "Love is Just Around the Corner" from "World On a String" 1957 Bluebird

Donald Byrd & Pepper Adams "Day Dreams" from "Out of this World" (Jazz, 1961) on Compulsion

Serge Chaloff "Keen and Peachy" from "Boston" 1950 on Uptown

Bix Beiderbecke "Trumbology" from "Way Down Yonder In New Orleans" (Jazz, 1927) on Okeh

James Carter Organ Trio "Tis the Old Ship of Zion" from "At the Crossroads" (Jazz, 2011) on Decca

Posted by Steve Provizer at 3:00 PM No comments:

Pianos are percussion instruments (Nice history here). Beethoven, Liszt, Chopin and company did not write namby-pamby music and the evolution of the piano was spurred, in many ways, by trying to make the instrument play louder and faster.

Jazz pianists took full advantage of the piano's dynamic range, although there have always been widely different approaches to "touch." Early stride players like James P. Johnson, Willie the Lion Smith and Lucky Roberts were called "two-fisted" players. They were likelier to work the keyboard harder than those players coming through the more "modern" jazz vector of Earl Hines and Teddy Wilson, who put more emphasis on the right hand and, rather than striding (breaking up the chord in oom-pah fashion), using the left hand to just play the chord.

The bop pianists, Bud Powell, Tadd Dameron, Al Haig and company, were mainly occupied with right hand lines and block chords and tended to play in the mezzo forte to forte range most of the time. Art Tatum, Jaki Byard, Oscar Peterson, Jimmy Rowles and others continued to utilize both bop and stride approaches. Thelonius Monk and Count Basie used both stride and line approaches also, but were, in some ways, sui generis.

This post is not meant to be an omnibus catalogue of jazz pianistic touch, however, but to emphasize the more percussive end of the spectrum. We'll start with two of the premiere stride, or "Harlem" style pianists, contrasted with two seminal bop players.


Read more »
Posted by Steve Provizer at 3:06 PM No comments: 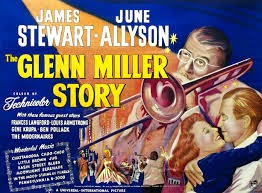 There are good documentaries about jazz. A person can see the films listed on this site and walk away without reaching for the gas pipe. But, as the furor around the film Whiplash (well, to jazz people it was furor) reminds us, it's wise to keep the bar low. 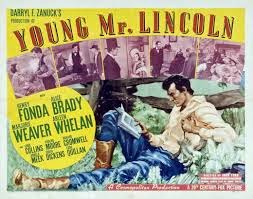 When Hollywood does jazz, it should stick to hagiography and cheesy romance: The Benny Goodman story, the Fabulous Dorseys, the Glenn Miller story; these are really just the Lindbergh, Curie and Young Abe Lincoln stories with clarinets and bobby socks. Henry Fonda coulda played Miller and Jimmy Stewart coulda been Lincoln. Fred Astaire and Burgess Meredith as trumpet players in Second Chorus, competing for Paulette Goddard? No problem. These movies are a nice, comfortable roll in the lowest common denominator hay. And, of course, any time Louis Armstrong is on, he lights up the screen. Ditto, Hoagy Carmichael.

But, when the egomaniacs in L.A. go all arty and pseudo-egghead on us and decide they have to "explain" jazz and jazz musicians, it's a formula for disaster.

Remember your initial excitement when you heard about "Round Midnight," and about "Bird"? Remember your disappointment after you saw them? Why didn't they let Dexter play anything up tempo! Why did they make Bird a man-child! Why did they strip the original rhythm section off the sound track! Bird didn't look like that when he played! Is every black man a tragic figure and every white man a dolt?

Possibly the most exasperating example of the genre is "Jung Man With a..." Sorry: "Young Man With a Horn." The insane ilk of psycho-babble that oozes through this movie like celluloid arteriosclerosis makes me think Professor Irwin Corey had a hand in the screenplay. Kirk Douglas/Bix Beiderbecke has "one wing" then falls for the broken pseudo-shrink Bacall who has a pet macaw? She smashes your 78's? I hate to see that; even if they're just Caruso on Victor. You're right, Kirk/Bix, she is "dirty and twisted inside," while you-were-born-to-play-the-trumpet-and-can-only-communicate-through-that-damn-horn. Why, oh why do they try and foist off that juvenile premise: "I want to play the note that no one else has ever played?" Bejasus.

Don't ask me if the same 4th-class Freudianisms befoul the Dorothy Baker novel it was based on. I can only deal with psychic effluvia in one genre at a time. "Based on the life of Bix Beiderbecke"-my moldy toenail. Harry James is the film's music adviser and dubs the trumpet parts. James is a great player, but his style bears as much resemblance to Bix's as, well-you finish the analogy. Kirk Douglas pushes the trumpet valves convincingly and has the appropriate unyielding embouchure and convincing lunatic gleam in his eye. 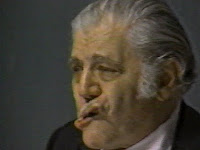 Happily, the movie is quite informative for all you trumpet players out there, as there are at least 4 mentions of the loathsome "roll" in this movie. You know, where the mouthpiece gets too low on your lower lip? You better correct it pronto, or I will strap you in this comfy chair and force you to listen to cinematic dialogue about trumpet rolls until your chops fall off.

I suppose it's not really the aspiring filmmaker's fault. They're not gonna raise a lot of money to make a movie-insightful or not-about jazz, unless it's about Miles Davis, who is now the only jazz musician that Americans can name. We'll see how Mr. Cheadle makes out with Miles, but when you walk into the multiplex, my advice is: caveat jazz emptor.

Posted by Steve Provizer at 5:18 PM No comments: