Since the 1960's, it's become common for bass players to keep a bow handy, and many became adept users-Jimmy Garrison, Ray Brown, Eddie Gomez, George Mraz, Christian McBride, Michael Moore, and others. BUT-99% of the time, they use it only for long tones that are meant to add dramatic underpinning to an intro, in interlude or an ending. Actual bowed (known as "arco") solos are rare.


The recent birthday of Leroy Elliot "Slam" Stewart (b. 9/21/14) reminded me what a virtuoso bass player can do with a bow and how few such players there have been. In fact, I can count them on three fingers, Slam Stewart, Major Holley and Paul Chambers.

"Mutes and Other Distortionary Audio Lenses" by Steve Provizer

My last post showed some of ways mutes have been used in jazz trumpet playing.  The technological extension of the sound alteration/manipulation done by mutes is, of course, electronics. Or, before that-mechanics. The photo below shows the mechanical trumpeter constructed by Friedrich Kaufman in 1810. Obviously, after a very tough gig.
Note that I'm not talking about simply updating the means of amplification by having a wireless mic attached to the bell of the horn; that simply allows the player to move away from a stationary mic and still be heard.


You do need to run through a mic so that the sound becomes an electronic signal. Then, you can run it through an effects box. Initially that process involved re-shaping an analog wave, but for the last couple of decades, like everything else, this has moved into the digital domain; domain being the appropriate word for the hegemony of this technology.

Read more »
Posted by Steve Provizer at 4:45 PM No comments:

The Lure of the Mute by Steve Provizer

I. e., the thing you stick in the bell of your horn to change the sound and/or make it softer. Could be anything. I'll do a quick recap here and get into it more next time. 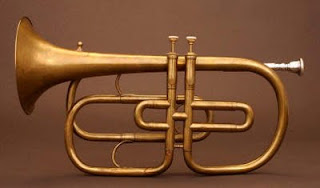 The trumpet in its present state is a relatively new phenomenon-final evolution in the mid-1800's. It's a good bet that early on, the complaints of neighbors got some horn players to jam a rag into their bells to keep peace in the 'hood. Of course, there was sometimes a quiet woodshed to go to, but the idea of sticking something in the end of the horn to alter the sound didn't pick up steam until some time later.

As far as I know, there is no notation in a classical score asking for a mute (fancy Italian word: sordina) until well into the 20th century. After all, you choose to write for a trumpet because the thing is so damned loud. Likewise, no mutes in Sousa, or James Reese Europe.

Jazz Evolution: Filling Up The Holes by S.G.Provizer

A recent post on Playjazz, a site with much to offer aspiring jazz musicians, said this:

This is why it's so important to listen to music from the whole history of jazz - because familiarity with the roots of the music allows us to hear the notes that aren't being played in later forms. Without knowledge of the earlier idioms, the brain is unable to 'fill in the gaps' when a modern musician implies certain material instead of stating it explicitly.

My reaction is that he kind of got it backwards. Jazz has evolved to fill up all the holes. Listening to the old stuff is imperative, but ironically, because jazz history has moved in a certain direction (more notes), it's natural for aspiring jazz players to want to jump on the continuum.