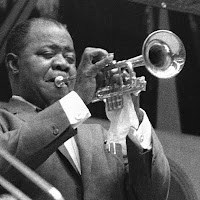 Doug Ramsay was kind enough to feature my Louis Armstrong: Operatic at the Core post on his blog Rifftides. Author of the Armstrong book Ricky Riccardi responded, as did Brew and all concerned have said I could put the conversation on this blog. So, here it is, with an extension:

Posted by Steve Provizer at 1:16 PM