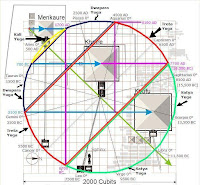 Hindus break up history into extremely long time spans. We're nearing the culmination of the Kali Yuga, an era of dissolution and breakdown that sets the stage for the next cycle of rebirth. It's always easy to believe you're living in a period of dissolution-it's part of a golden age/nostalgia spiral that's very appealing to the homo sapiens. But even if you don't buy the Hindu cycle concept, it seems reasonable to assume there are larger forces at work. "A divinity that shapes our ends"? Maybe. I think of it as an accretion of cultural/political/biological/cosmological details that dwarf us and our hair-brained diversions. This concept, at the least, offers another way into questions such as why jazz tools, like McCoy's particular use of harmony, pentatonics, etc. no longer seem, for lack of a better word, applicable.
The old saw is that an artist has to be "of his time." This is particularly an active principle in the world of painting, which puts "newness" near the top of the value scale. For me, a better idea is "rootedness;" the illusory quality that makes art seem both of its time and timeless.
How do you know what has or lacks this quality of rootedness? Maybe start by noting when you don't see, hear or feel it. Watching great young musicians who have worked thousands of hours mastering this incredibly complex harmonic and rhythmic music jazz (yes, I left out melodic-that's a different post)), I marvel, even wallow vicariously, in their technique, but I say to myself: poor bastards. This is not their time. It's not, as some of my friends say, an issue of education or exposure and it's certainly not to insult the honest effort of jazz musicians. I'm simply saying that the tools they draw on-such as those developed by Tyner-appear to be impotent in the face of the power, energy and momentum of this epoch-whether or not you call it the Kali Yuga. Like all of us, these musicians are suspended in a magnetic field; one that seems to consign their music to the margins, but which is simply dancing its way through destruction to re-emergence. 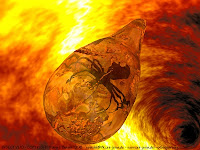 I know a piece as ambiguous as this will be subject to wide misinterpretation. Some will say: "is he telling us jazz musicians should sell out? No. Frankenstinian attempts to graft on the kind of music that many people do like are ludicrous. Or: "are you saying the Jazz Blog Industry should shut down?" Shoot no-I'd be out of a non-job. And if you say to me: "Alright, smart guy, what resources and tools are you then asking musicians to draw on," I can only say: self-awareness, which is no kind of answer at all. Then again, I'm just the guy who's standing in a dark room, with enough insight to know he's in there, but who is too stupid or riven by habit to know how to do anything except continue to confuse a rope for a snake.
Posted by Steve Provizer at 6:49 PM

So Steve, what you're basically saying is that jazz sucks, right?
(sorry - I couldn't resist)

But thank you for justifying all the hours I DIDN'T spend learning how to play Giant Steps.

I'm not sure that rootedness is the best word for that "illusory quality that makes art seem both of it's time and timeless.", but I certainly like the idea of moving away from "newness" as a dominant value.

And whatever it is, I think it's not illusory, (well, unless it's all Maya), but very real.

You pick on Tyner's pentatonics in your example, but I think it really points to a larger issue in jazz (pedagogy). The problem is not the tools (such as pentatonics) but confusing the tools with the music - the idea that mastering more (and more complex) tricks and tools is the same as learning how to create music.

I believe the key to all creation is improvisation. The rootedness you are speaking of is the rootedness of a person fearlessly improvising themselves, in that moment, as a musical expression (and I mean self in the widest sense).

I believe musical learning, like all other real learning we do should start with that moment of improvisation, and move outward, rather than starting with the tools someone else used in their moment, and trying to go inward.

Tom-Touche...Actually, thanks very much for your comment. It presents one cogent, reasonable way to move forward. It does leave the question open of the extent to which-or the process by which-the history of the music is absorbed by young musicians,

Inre 'rootedness,' or whatever one may call it-yes, it's real, but it's damned sliippery to particularize.

After reading this article I can only speak for myself. If a jazz musician has his roots in the Blues, I’ll listen to him, or her. If they don’t, I’m no longer interested. I know that’s rather simplistic, but it’s been good to me for nearly 60 years of listening to Jazz. It doesn’t matter whether they’re from the 1940s or last month. The rule never changes and I can lead a much less complicated life.

Tom-the blues is a great touchstone. There are times, tempos, situations when the musical aesthetic is so different that other criteria seem to be called for.

Many young pianists, in an earnest effort to sound modern, consult the time-worn touchstones of Bud Powell, Herbie, McCoy, and Chick.

Some don't manage to escape a patchwork identity based from these same influences. Others however, manage to take these pianists' languages and to weave them, along with their own personal language, into a compelling voice. Not something dramatically new on the order of a Cecil Taylor, but if you are playing tonal music and music that complies to regular meters, this is no simple feat.

I would cite as examples, Geri Allen, Marc Cary, the late Kenny Kirkland, and Stephen Scott.

They're all very distinctive players but they all come from this well of influences. Scott has also brought Ahmad Jamal's influence to bear on what he does, and few piano players have really tried to reckon with that language.

As a jazz student, you find yourself in a world of its own, with its own rules and hierarchy. Basically, high up on the ranks you find the people who can play what the old cats could play, and it takes time to realize that even though it's necessary to know the history of the music we're playing, the characteristic of a jazz musician should be his need to go forward, even if not everybody understands it or it doesn't relate as much to the jazz school commons.
But it's hard to find out how much of the jazz history you have to absorb to understand jazz, in order to find a way for yourself after.
Yours truly, one of the poor bastards, I guess :)

The idea of "moving forward" mentioned by Mary begs the question of which musical genre a young person is likely to choose as a platform to accomplish that. Jazz has a dense, hundred-year history, with stars and a canon. That has its appeal, but is intimidating.

Hip hop is a much younger genre-both in terms of history and demographics, as is rock and roll.

Making your mark in any genre is not easy, but all other considerations aside-and there are many-jazz seems like a particularly daunting place for a young musician to operate in order to forge a personal musical identity.

"stuck in amber, it comes down to just faithfully being your quirky old self without looking over your shoulder all the time to see who's following or laughing at you. by the time the dust settles, you'll be too dead to know the difference if there is any to begin with."

I just love sarcasm, thanks for that!! Plus, it has a you-can-do-everything-if-you-believe-in-yourself touch.
Both combined: it makes my day!