The Cortex and The Booty-by Steve Provizer

This is Your Brain on Music
The brass band I play with has been talking about the Asphalt Orchestra. In their videos, they seem to be having a great time, engaging the crowd, playing interesting, offbeat music (apart from New Orleans stuff, arrangements of Zappa, Bjork...). On the other hand, a band-mate saw them on the plaza at Lincoln Ctr. over the weekend and described them as "appealing more to the intellect than wanting to make you dance."
Meanwhile, back in Boston, I was sitting in on trumpet with a friend's rock band. I only knew one song we played: The Weight, by The Band. The others were songs that I'd either heard once or not at all. I was "the horn section," which is how trumpet or sax is thought of in that context. In each song, the band made a

few bars space for me to solo- I liked being forced to think in bite-sized chunks. Otherwise, I just played little back-up riffs. It was Rock, people danced to it. I loved the response.
So, Rock and the Asphalt Orchestra; music leaning toward the body or the mind, with one organ still waiting to be put in the scenario. Right. The heart. Where does that little muscle fit? What's the delicate balance between the cortex and the booty that needs to be achieved so that each gets the orgasm it deserves? 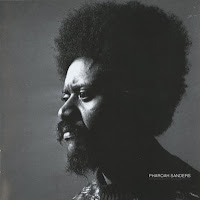 Probably the moment of most intense musical mind/body fusion for me was a show I heard in the 19?'s with Pharoah Sanders at the Village Vanguard. After a while, you just stopped listening and surrendered, as Pharoah pulled you at 90 miles an hour down a sandpaper highway. The more you released, the more joyous the trip. The energy of the audience was raised to the point where the only thing we could do was start pounding on the tables, howling like banshees.
I know that some construct of "mind" must have been present or my body would not have responded-I'm too hard-headed (or too "schooled")-but it's the response of my body that remains vivid.
Why is that unity so elusive? In the pursuit of complexity in harmony and form, what, if anything, has jazz sacrificed in terms of its appeal to the body? Is "swing" just another word for the right balance?
Posted by Steve Provizer at 1:04 PM

The mind/body balance does seem elusive with jazz anymore. I think a lot of this has to do with the people who go into jazz though. If you've got kids going into jazz who were raised with the idea that jazz was "high culture" fit for the concert hall, then they're going to tend to look down on making people want to dance or scream.

Cynically, you could also say that jazz was bound to become less populist and appealing to both minds and booties alike when it lost favor in the black community, and whites were there waiting to pick up the slack.

Your using Pharaoh Sanders as an example is good though. Music doesn't have to have a backbeat or some traditional "soul" vocals or horns to get under people's skin and make them want to shout and dance. I have heard some free jazz myself that was so ecstatic it felt like it was swinging in ten different ways all at once.

The basic problem for people making good music these days is a lack of exposure to that music in a personable context. GOOD VENUES. They are in short supply. You don't get people hooked over ITunes. You do get them hooked live and in person.

My comment in the "Tyner in Amber" post about what musical platform a young musician might choose as a means of finding a personal musical identity bears on this. The seemingly daunting quality of jazz (also the way it's abused in movie/tv soundtracks, etc) narrows young people's perceptions of it and they may not investigate it deeply enough to see its full emotional potential.

First time I heard a Ravi Shankar album, I ended up dancing all over my bedroom. Recently, I've been listening to Charlie Christian and boy does he swing (although I always thought that swing had to be little offbeat on the metronome in order to, you know, _swing_).

I heard Pharoah Saunders at the Jazz Workshop and he tilted the bell of his horn in a certain way to the mic so that, all of a sudden, the overtones started to reverberate around the room. He was playing the room as if it were an echo chamber or a church. It was very cortex but at the same time booty beyond booty.