"Alice in Jazzfest Land-Part I." by Steve Provizer 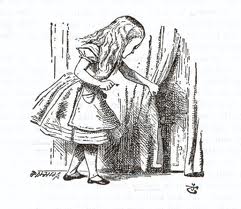 The New Orleans jazz and Heritage Festival (Jazzfest) is both blessed and accursed. It brings out both the Jazz Curmudgeon in me and the Jazz Booster. In this entry-the curmudgeon...

I hadn't been to Jazzfest in maybe a dozen years, my patience having been worn thin by the crowds and the limitations of the jazz tent, where people squatted all day, making it hard for those of us who liked to wander around and hear some gospel, Zydeco, etc.

The incursion of BIG ACTS started to jack up the size of the crowds, and back then, the acts weren't even that big-the Allman Brothers, Van Morrison. Now, they are. Bon Jovi, Wellenkamp, Robert Plant, Tom Jones(!), Kid Rock... 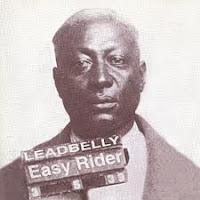 This is not a philosophical, moral or musical judgement on whether these acts should be there ("All music is folk music. I never saw no mule sing it"-Leadbelly). Vive la difference. But the presence of these acts and the throngs they draw affects the experience of everyone.


There may be upsides. First, fans of Kid Rock and co. almost certainly come into contact with other kinds of music, although it's a good bet the exposure will be at the outdoor stages, not in the tents that house jazz, blues, gospel, youthful players or very small ensembles. Second, more people get a job-even if it's standing for hours in the hot sun, waving a red flag to signal pedestrians to stop and let golf carts and trucks go by.

Much remains the same-good food, great local musicians-and I'll get to that in the next post. But the fact is, my overall experience was increasingly like America is and less like New Orleans is. 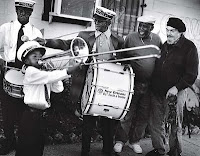 I ain't saying all is rosy on the streets of N.O. If you've been there, you know, but for better or worse, the place is different than any other city in the U.S. It's beautiful/ugly, wily, inventive and desperate. Even when it succeeds in being slick, there's an edge to it, always the sense that the whole thing may spill uncontrollably into the streets and end up in the local lockup.

Jazzfest is headed in the opposite direction. It's an entity whose demographics are increasingly appealing to larger corporations; the natural result of a growth spiral which favors the favored. It mirrors the growth of suburban pop concert venues twenty miles away and the demise of the corner bar.

Again, I'm not talking about some ineffable nostalgia. I'm talking about what sound the wind carries to your ears as you wade through the crowd, about having to look at thousands of people who agreed to put Shell Oil co. logo stickers on their hats and shirts so they might win some free gas and yes dammit, about people who wouldn't recognize a trumpet if you dropped one on their head.


Next time: The Upside: Misters in the Jazz Tent.
Posted by Steve Provizer at 5:42 PM