Horns and Hormones by Steve Provizer 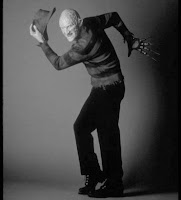 Getting married tends to take a guy out of the blog loop, but like Freddie Kruger, I manage to stay alive for the sequels...
I just finished reading "Hotter Than That," sub-titled "The Trumpet, Jazz and American Culture." I might add-"That's Awfully Grandiose For A Book That Slices Off Such A Teeny Tiny Piece of It," but that's the kind of blurb and sub-title hyperbole that jazz books aimed for a general audience sometimes indulge in.

I realized after I read it that Krin Gabbard, the author, had edited two weightier tomes I read a while back when I was contemplating going to grad school: "Jazz Among the Discourses" and "Representing Jazz;" the kind of stuff that convinced me my place was not in the Academy.

There is interesting material in this book-trumpet history, the dangers/early deaths of trumpeters, some material on how the trumpet is made (albeit with too much conversation with and about Dave Monette),  a variably entertaining exegesis about Miles-but remembering Gabbard's academic inclinations helped me understand why he took such pains to introduce a "THESIS" into "Hotter Than That;" a thesis requiring significant mental contortions and sporadic leaps from a high, shaky scaffold into a shot glass-sized target.

Here it is: The choice of the trumpet signifies the need of the trumpet player to express his manhood. African-American players, starting from Buddy Bolden, were given few ways to express their manhood, therefore grasped eagerly at this opportunity and developed all the possible musical-and extra-musical ways (clothes, strut) to accomplish it. White players ("who unquestionably possessed a special breed of masculinity" saw this and, rather than becoming athletes or professionals, became jazz musicians. His case extends to saying that Goodman hired Cootie, Dorsey took on Shavers and Shaw hired Lips Page in order to "boost their (the band leaders) masculine presentation." Whoa.

Alright, we've talked enough about ego in this blog to not dismiss this thesis entirely, especially in the case of African-American musicians, who indeed had far fewer choices for anything. But why push it so far? (WARNING: amateur shrinkage ahead). Gabbard is an aspiring trumpet player himself, and I can't help but notice how longingly he talks about hitting the high C's and reaching that hyper-masculine, testosterone-riddled musical pinnacle: The Lead Trumpet Player.

He seems to be aware of the other pleasures of playing and also says that "a lead trumpeter might also be a nerd masquerading as a brute." He admits there are some great female players and also notes the fact that the guitar replaced the trumpet as our adolescent male's chief macho instrumental choice. None of this seems to derail him from his need to return to the masculinity leit motif. 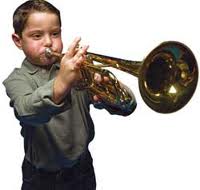 So, you trumpet players out there, seems like the safest thing is just to fess up. You know you suffer from a lack of hormonal self-confidence, so wise up, cop to it and give it a gangster lean. Just repeat after me: "I'm too sexy for my Benge, too sexy for my Schilke, too sexy for my Bach..."
Posted by Steve Provizer at 8:46 PM

Check out FONT,.the Festival of new Trumpet music group,.to see that there are people taking the trumpet to every extreme possible and beyond.(All coming from the innovations of Bill Dixon I would suggest)These guys are not on the macho power vibe,.they are fearless sound explorers.

I know the other school,.and the guys who wear the triple high C tee shirts.That's some twisted shit.

There is a way to engage the trumpets power without being an assh***,.to be frank.It's all about the environment your in and when you choose to put everybody on blast.There are times when the Trumpet should lead,.and times when it should not.The end result is that the trumpet has the power to take charge and dominate,.and as a musician you have to feel the right moment for this to take place.Trumpet players can make you hear them,.good vibe or bad.

You also have to BE that person that can "bring everybody home".Certain people can and should do this.Some cant and should not.

I'm sometimes in a unique position in NYC in musical situations when I have to bring the group together and and/or change the direction the music is traveling in(like create an ending)The trumpet is perfect for this.Is it all about macho power? Not if it's coming from the right place.I once was accused of being all macho power with nothing to say on Bass Clarinet by someone to afraid to leave their name online.(heh)

The trumpet can really be a true expression of manhood,.but it's deeper than that.One could argue that Miles was the ultimate expression of this,.but what about all that sensitivity? And what is TRUE manhood? (Steve,.let's hear the married guy take on that).Lee Morgan sometimes had a vibe that was more about "I'll kick your ass",.than anything else.I love it when he puts the trumpet in it's place.


In life,.there are times when certain things must be said,.things that people are afraid to say.

In music it's the same way.

With a trumpet in your hand,and that feeling all inside your body,.we say what we have to say.

Matt-This is clearly a subject near to your heart...I think it goes without saying that there is no "true" manhood. It is interesting to contemplate how the general cultural shift in male/female roles will or will not be reflected in approaches to trumpet playing and to all traditionally male-dominated musical bastions.

I've always found the stereotypical personalities of musicians interesting. Brash trumpet players....guitar and sax players as the womanizers....keyboard players as the nerds....drummers as animals....violists as timid and terrified....but in my actual experience.I don't find the stereotypes fit all that snugly....except maybe the.piano player nerd thing.....think its all the theory we consume.

Steve,.your right.Just thinking about the subject increases my pulse a little.I cant explain it.I never made the choice to play the way I sometimes do,.I just do.I think your writing about something that relates to my core conception,.the one that was always there,.but I've still spent 20 years looking for.It's a trip to try and be honest about it.

The balance between male and female,.and what that is or is not,.the lines are pretty blurry in 2010.

I will say it takes courage to play all the emotions we feel,.and be honest with ourselves and the world when we play.

Miles and Lee are still haunting me to this very day.Maybe they were the most REAL.

Have recently discussed, and played today the wonderful, nowadays completely forgotten Billie Rogers, one of the most brilliant female trumpeters (and a capable chanteuse as well).

Give me some time, and I will play her for you as well. -- Bah, my old Conn being sexier than me?

And I completely disagree with the thesis that the white bandleaders you've mentioned hired the black brass greats for their own sex-appeal.

Was there a more attractive (white) musician on the scene than Artie Shaw?

What he would have needed was a female harpsichordist for balancing out his hyper-machismo attitude.

There's a lot of this 'substitute for masculinity' thing being talked about for decades now and they all got it wrong -- I know I AM a trumpet player.
You want one overriding characteristic of trumpet players? That's easy -- we're all stark raving mad!

BigTiny: Yes-and with the super-intelligence to know how stark raving made we really are.

Yesss! And I was especially mad during the last weeks, mad about the Bird, and the heavy stuff he and his contemporaries wrote.

My bass player CR came by for helping me to escape the bebop-madness (I was still on it somehow). What did we do?

We listened to Woody's 1st Herd at first, some of his famous charts like "Bijou", and "Laura" ... this was step #1 to sanity (although still too much bop-tinged, right?).

We traveled to the West Coast then, taking Stan Getz & Conte Candoli with us (still too boppish, and too much brass of course), and came closer now to our destination, which was clearly defined from the start on: Mr. R. came by for listening to John Coltrane.

And yes, we've found our way to Trane by taking one last bridge: Stan again, this time in quartet with Bill Evans, Ron Carter, and ... Elvin Jones, yess, Trane's 2nd half of his heartbeat.

And then? Trane at the Village Vanguard with Alice, Pharoah, and Rashied; Trane at Birdland with Eric, McCoy, Jimmy, and Elvin (February 10, 1962), and then without Eric, recorded on June 2, 1962; that's the LP, issued on Affinity, not the Impulse release.

And then? I was cured from the bebop-disease, burned some of the stuff on three CD's, and Mr. C.R. went back home.

And what did I do? -- I lighted a cigarette, drank the rest of the coffee, and listened to one of the most unboppish of all jazz LP's (and one of the shortest in jazz history!):

Where's the testosterone in Miles's horn?

Didn't Miles box, just for proving to himself what a tough guy he was, and not the coolest of the cool?

Was Miles sexier than his "Martin", or vice versa?

Okay, he had hired one trumpeter once, in the 1960's. -- But not for jazzin' (sexing?) up his great quintet, no, just because he loved (and respected!) Kenny Dorham, and because he wanted to know how the rest of his band (with Wayne already) sounded with another horn.

Yes, I'm also raging mad (as is my writing) ... but only today! (Feel free to see my main blog tomorrow morning, 'round 11 o'clock German time).

I don't hide, Steve, never ever; but something's wrong with my design, if you're talking about that at all.

Anyway, I'll reopen that bloody blog right now because I think it's a temporary bug in the system.

P.S. -- It's my browser. Installed "Firefox" now, and everything's cool.

Brew-I think you misunderstand. "You can run, but you can't hide" is an expression we use that covers a lot of different situations. In this case, I meant that you can temporarily remove your obsessions, like bop, but they will always return and find you.

You have to be a little nuts to play a horn that is so ruthless.Walk away for 1 week and watch your chops fade away.

Maybe that's part of the problem here.Is it a "male" thing to engage in such a lop-sided power relationship? Is the trumpet worth all the sweat?

I've been married to mine since 88.

I have a mistress though.

(making horns people shows how deep and cRaZy I must be.)

Is That a raging male ego as well?

The trumpet,..she hit Miles back.

I have the same thing w. valve trombone that Matt has with his fluegelhorn-no struggles; but it just doesn't have the sound I want.

Just Kidding man.That's one of the "rules" that I'm happy to hear your breaking.