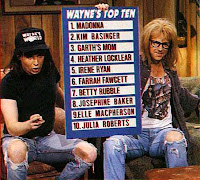 The "Best Of" List Industry continues to grind out the sausages. Downbeat Magazine's recent listing of the 25 Favorite Big Band Albums is not the worst example, but it did snap this camel's back. Call it vain, call it ironic, but in an attempt to undermine this international conspiracy, I offer my own top ten list:


1. Usually there's no commentary at all to validate a listing. If there is, it doesn't.
2. Hyper-selectivity is anathema to discovery. Stumbling through a thicket of sound leads to real discovery, not following a road map.
3. Listing is something you do when you walk back to your cabin after drinking to forget that the ship is about to capsize.
4. Inclusiveness doesn't work. The more people you ask to help produce a list, the more the juice is sucked out.
5. The Net's about self-aggrandizement; no one argues with that. Can't ya be a little more subtle about it?
6. It may be possible that someone could go to a friend's house for a listening session and say "Play me your top 10 Zoot Sim's records." OK, but there are so many more interesting ways to go from one side to the next that if you actually did spend the night with these 10 albums, I'd recommend seeking treatment for OCDC.
7. By reifying the 'experts,' lists decrease, they don't increase, the flow of actual communication. Trust your friend's musical advice, not a stranger online.
8. At least keep the list short. The larger the list, the harder it falls.
9. Getting on such lists only misleads musicians into thinking their gigs will improve.
10. You've probably stopped reading this list by now, which only goes to prove my point.
Posted by Steve Provizer at 5:41 PM

reifying the experts: is that like ragging the classics?

List mania is strange although it pleases some folks I like and I indulge it in the same spirit that others put up with my numerous lapses.

I did find a more interesting assertion of sequence last year but haven't done much with it.

CD's are almost like tarot cards and you can shuffle them.

So one day I pulled a whole bunch of things in a rough one year stretch from September 1963 til November 1964 and made a chronology of them.

Damned if it wasn't an unusual period of activity. Bill Dixon convened his early ensembles, Dolphy recorded Out To Lunch and joined Andrew Hill on Point of Departure.

All in all it was an unusual time frame. And that is just some of the work I have laying around.

Here's a better game, do one of these sequences and play a year, whatever falls into it in what ever sequence naturally occurred and muse on what else must have been going on then.

I discovered my favorite jazz recordings the old fashioned way. If I liked a sideman I heard for the first time on a particular record, I'd seek out his work on different records and/or as a leader.

It was amazing how quickly doing this took me in and out so many different eras and sub-genres.

Yea, that's the kind of work I'm talkin' about... If you're gonna make lists, at least admit that there's no real altruistic-deepen-people's-investment payoff here.

That seems to be the way we all did it. Cooks blessed mom got him a deadbeat subscription when he was still in Junior High but we started to notice it sucked early on.

My earliest music finding was based on listening to Steve Elman on WBUR before NPR became its current quasi travesty.

I'd wait for set breaks with a pen and paper and write down the things I liked and then go find them. Or my friends at Discount Records would play things in the store and give me in store play copies for free.

Top ten lists are only useful when they betray the reasoning of the compiler because then they comprise an argument and it makes it more fun to respectfully agree to disagree.

Agreed, but usually the list auteur seems to have little psychic investment.

I've been browsing online more than 3 hours lately, yet I by no means discovered any interesting article like yours. It's beautiful worth enough for me.Personally, if all site owners and bloggers made good content material as you did, the web might be a lot more useful than ever before....
hairdressers Edinburgh

Ms. Scott, I hope that you're a real person and not spam, because I relish getting human compliments. Steve